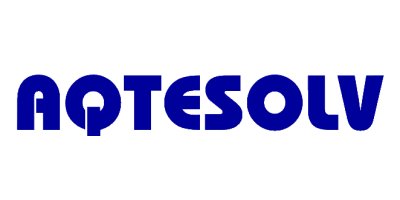 AQTESOLV provides the most complete suite of methods for the interpretation of constant-rate and variable-rate pumping tests.

The figure illustrates the application of the Tartakovsky and Neuman (2007) solution for a constant-rate pumping test in an unconfined aquifer with three-dimensional saturated/unsaturated flow and noninstantaneous drainage at the water table.

With AQTESOLV you are not limited to the analysis of traditional constant-rate pumping tests; interpretation of variable-rate conditions is also possible for situations including step-drawdown tests, recovery tests and sinusoidal pumping tests.

With AQTESOLV you may perform pumping test data analysis with more than one observation well.

The buried channel aquifer example shown above uses a powerful feature in AQTESOLV that automatically generates image wells to model the effect of aquifer boundaries.

You also may perform distance-drawdown analysisin AQTESOLV to interpret pumping test data from more than one observation well. For a specific measurement time, drawdown is plotted as a function of the radial distance from the pumping well to the observation well.

Use AQTESOLV to analyze pumping tests with more than one pumping well. Each well may have its own unique geometry (e.g., penetration depths) and pumping rate schedule. AQTESOLV places no internal limit on the total number of pumping wells that you may use.

You may use pumping test solutions in AQTESOLV to predict the magnitude and extent of drawdown for extraction and/or injection scenarios involving multiple pumping wells.

No reviews were found for Software for Pumping Test Analysis. Be the first to review!