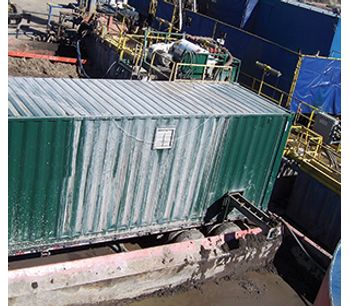 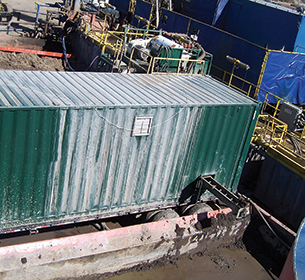 Saving Money, Time, and the Environment Through Chemistry A General Process Philosophy Description of Elgin’s Drilling Fluid Dewatering Systems.   The drilling industry is regulated by a myriad of environmental regulations that protect our air, water, and land resources.  As these regulations continue to evolve, so too must the technologies utilized by the drilling industry.  Though lowering compliance costs is always a worthy initiative, incorporating technology that also enhances the drilling process by improving down-hole conditions and lowering the consumption of chemicals and drilling fluid additives is the ultimate goal.

Elgin’s proprietary Drilling Fluid Dewatering (“DFD”) Technology lowers the costs associated with drilling fluid make up, lowers the costs associated with used drilling fluid disposal, improves the properties of the drilling fluid while drilling therefore improving the rate of penetration (“ROP”), and ultimately reduces the impact to the environment. As such, Elgin’s DFD Technology is the key element in 100% closed-loop waste management systems; therefore saving time, money and the environment.

Since 1864, Elgin Separation Solutions (Elgin) has been providing sophisticated solids control and dewatering products to customers around the world. In doing so, Elgin has developed a unique set of core competencies that have made us a service leader in separation technology. By combining expertise in both dewatering polymers and solid/liquid separation technologies, Elgin has developed an organization capable of providing complex chemically-enhanced mechanical separation solutions.

Though the concept is relatively simple, the use of DFD Technology requires a considerable amount of planning, training, and operator skill.  It is a process which varies greatly with location and mud type. Consequently, by combining Elgin’s decades of dewatering experience, Elgin has developed a patent pending1 DFD Technology that takes the complexity and guessing out of the process. Elgin’s DFD Technology takes advantage of powerful organic polymers, an intelligent human-machine interface (“HMI”) and a sophisticated programmable logic controller (“PLC”) that simplifies the dewatering process making it a technology that can be used by any drilling operation.

The concept of dewatering drilling mud while drilling,was initially inspired from the need to reduce or eliminate liquid mud disposal.  Today, DFD Technology is used also to reduce operating cost and improve drilling efficiency.  In order to provide bit lubrication and cooling, cuttings removal, and well control, the properties of drilling fluid must be carefully controlled.  As cuttings build up in drilling fluid, the weight and viscosity of the drilling fluid increases, which in turn increases drag forces on the drill bit slowing the ROP, increases the thickness of wall cake on the borehole wall, and makes control of the well pressure more difficult.

For both environmental and economic concerns, it is better to reclaim the water phase of used mud and dispose of only dry solids than to haul off and dispose of whole liquid mud.  Dewatering systems also enable water to be reclaimed from used drilling fluid and subsequently combined with unused or recirculated drilling fluid being pumped down the drill pipe and returned to the surface.  Using reclaimed water to maintain volume prior to being recirculated down-hole reduces the costs associated with transporting clean water to the well site for such purposes. After water is separated from used drilling fluid, the remaining solids for disposal are smaller in volume and lighter in weight, as compared to that of the used drilling fluid prior to dewatering, and can be transported from the well site and disposed at significantly less expense.  In most installations, DFD Technology can also provide the additional benefit of eliminating the need for reserve pits, saving valuable room and further reducing operating costs.

Dewatering is the process of extracting the liquid phase from drilling fluids through the use of chemically enhanced mechanical separation.   In Elgin’s patent pending1 process, organic polymers are added to the drilling fluid via a conditioning manifold prior to entering a centrifuge.  The solid particles found in drilling fluid carry an electrical charge that causes them to repel one another, thereby enabling the solids to be suspended in the water.  Due to these repulsive forces and the concentration of colloidal / ultra-fine solids, the drilling fluid would require such a significant amount of time as to make this natural process an impractical means of dewatering.   To accelerate the dewatering process, the drilling fluid is first treated with an organic coagulant to destabilize the suspended solids of the mixture.  Colloidal solids may be removed from the drilling fluid after particle charge destabilization with a high cationic charged, low molecular weight organic polymer and then aggregated together to form a “hard floc” with the addition of an anionic charged, high molecular weight polymer.   As used herein, destabilization refers to the process of neutralizing the electrical charge of solids suspended in the colloidal mixture, or drilling fluid, so as to reduce or breakdown their repulsive forces.

Elgin’s DFD process integrates and controls the process of polymer hydration, polymer injection, drilling fluid conditioning, polymer/drilling fluid mixing, and solid/liquid separation via centrifuge technology.  This is accomplished within a single, packaged system fully controlled through a graphical human/machine interface that can help manage historical treatment data.    Elgin’s systems are designed to function as stand-alone systems or as a system upgrade that can be seamlessly incorporated into an operation’s existing drilling fluid management systems.