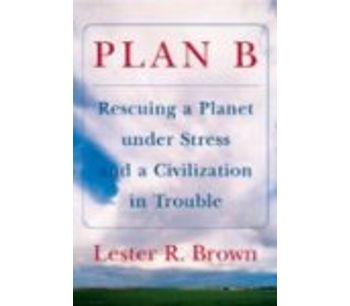 Plan B: Rescuing a Planet Under Stress and a Civilization in Trouble

We are creating a bubble economy an economy whose output is artificially inflated by drawing down the earth's natural capital.

Each year the bubble grows larger as our demands on the earth expand. The challenge for our generation is to deflate the global economic bubble before it bursts.

Throughout most of human history, we lived on the earth's sustainable yield - interest from its natural endowment. But now we are consuming the endowment itself. Our existing economic output is based in part on cutting trees faster than they grow, overgrazing rangelands and converting them into desert, overpumping aquifers, and draining rivers dry. O much of our cropland, soil erosion exceeds new soil formation - slowly depriving the land of its inherent fertility. We are taking fish from the ocean faster than they can reproduce.

We are releasing carbon dioxide (CO2) into the atmosphere faster than the earth can absorb it, creating a greenhouse effect. Rising atmospheric CO2 levels promise a temperature rise during this century that could match that between the last Ice Age and the present.

Bubble economies are not new. American investors got an up-close view of one when the bubble in high-tech stocks burst in 2000 and the NASDAQ, an indicator of the value of these stocks, declined by some 75 percent. The Japanese had a similar experience in 1989 when the real estate bubble burst, depreciating stock and real estate assets by 60 percent. As a result of the bad-debt fallout and other effects of this collapse, the once dynamic Japanese economy has been dead in the water ever since.

The bursting of these two bubbles most directly affected people living in the industrial West and Japan. But if the bubble that is based on the overconsumption of the earth's natural capital bursts, it wil affect the entire world.

Thus far the consequences of most excessive natural capital consumption, such as aquifer depletion, collapsing fisheries, and deforestation, have been local. But in sheer number and scale these events are now reaching a point where they may soon have a global effect.

Food appears to be the economic sector most vulnerable to setbacks, largely because the impressive production gains of recent decades were partly based on overpumping and overplowing. Overpumping is historically recent because powerful diesel and electrically driven pumps have become widely available only during the last half-century or so. Aquifers are being overpumped in scores of countries, including China, India, and the United States, which together account for nearly half of the world grain harvest.

Overpumping creates a dangerous illusion of food security because it is a way of expanding current food production that virtually ensures a future drop in food production when the aquifer is depleted. In the past, the effects of aquifer depletion on food production were confined to less-populated countries, like Saudi Arabia, but now they are becoming visible in China.

Water shortages, such as those in China, are becoming global, crossing national boundaries via the international grain trade. Countries facing water shortages often import water in the form of grain. Since it takes 1,000 tons of water to produce 1 ton of grain, this is the most efficient way to import water. Grain has become the currency with which countries balance their water books. Trading in grain futures is now in a sense trading in water futures.

Farmers may now also face higher temperatures than any generation since agriculture began. The 16 warmest years since recordkeeping began in 1880 have all occurred since 1980. With the three warmest years on record - 1998, 2001, and 2002 - coming in the last five years, crops are facing record heat stresses. Crop ecologists at the International Rice Research Institute in the Philippines and at the U.S. Department of Agriculture have developed a rule of thumb that each 1-degree-Celsius rise in temperature during the growing season reduces grain yields by 10 percent.

Falling water tables and rising temperatures help explain why the world grain harvest has fallen short of consumption in each of the past four years, dropping world grain stocks to their lowest level in a generation. If grain shortfalls continue, they will lead to price rises that could destabilize governments and impoverish more people than any event in history.

Plan A—business as usual—is not working. It is creating a bubble economy. Plan B describes how to deflate the economic bubble before it bursts. This involves, for example, reducing the demand for water to the sustainable yield of aquifers by quickly raising water productivity and accelerating the shift to smaller families. With most of the nearly 3 billion people to be added by 2050 to be born in countries already facing water shortages, pressure on water supplies will mount. If population is not stabilized soon, the water situation in some countries could become unmanageable.

Accelerating the shift to small families and population stability means providing women with reproductive health care, filling the family planning gap, and investing heavily in education to ensure that the U.N. goal of universal primary education by 2015 is reached. The more education women have, the more options they have and the fewer children they bear. We now have the wealth and knowledge to eradicate the poverty that fuels rapid population growth.

Avoiding the damaging effects of higher temperatures on crop yields means moving quickly to stabilize climate. In Plan B,Brown suggest cutting global carbon emissions in half by 2015. This is entirely doable, as a number of recent studies have suggested. If higher temperatures shrink harvests, public pressure to replace coal and oil with natural gas, wind power, and hydrogen will intensify worldwide.

A simple measure, such as replacing old-fashioned incandescent light bulbs with highly efficient compact fluorescent bulbs would enable the world to close hundreds of coal-fired power plants. Replacing nonrefillable beverage containers, such as aluminum cans, with refillable bottles can cut energy use by up to 90 percent. If all U.S. motorists shifted from their current vehicles with internal combustion engines to cars with hybrid engines, like the Toyota Prius or the Honda Insight, gasoline use could be cut in half. Cutting carbon emissions in half is less a matter of technology and more a matter of political leadership.

Not only do we need to stabilize population, raise water productivity, and stabilize climate, but we need to do it at wartime speed. The key to quickly shifting from a carbon-based energy economy to a hydrogen-based one is to incorporate the costs of climate change, including crop-damaging temperatures, more destructive storms, and rising sea level, in the prices of fossil fuels. We need to get the market to tell the ecological truth.

Unfortunately, since September 11, 2001, political leaders and the media worldwide have been preoccupied with terrorism and, more recently, the invasion of Iraq. Terrorism is certainly a matter of concern, but if Osama Bin Laden and his followers succeed in diverting our attention from the environmental trends that are undermining our future until it is too late to reverse them, they will have achieved their goal in a way they have not imagined.

One of the keys to deflating the bubble is redefining security—recognizing that military threats to our future are being eclipsed by environmental threats such as falling water tables and rising temperatures. Redefining the threat means redefining priorities, shifting resources from the military to population and climate stabilization. Unfortunately, the United States continues to invest heavily in an ever-stronger military as though that were somehow responsive to the new threats that are shaping our future.

The $343-billion defense budget in the United States dwarfs the defense budgets of other countries—allies and others alike. U.S. allies spend $205 billion a year; Russia spends $60 billion; China, $42 billion; and Iran, Iraq, and North Korea combined spend $12 billion. As the late U.S. Admiral Eugene Carroll astutely observed, 'For 45 years of the cold war, we were in an arms race with the Soviet Union; now it appears we are in an arms race with ourselves.'

The urgency facing the world today is at least as great as that which faced the United States as it mobilized for war during the early 1940s. Not only was the economy restructured within a year or so at that time, but the automobile industry—then the largest concentration of industrial power in the world, producing 3 million cars a year—was closed down and converted to the production of tanks, armored personnel carriers, and aircraft.

Today the stakes for the entire world are even higher. We study the archeological sites of earlier civilizations that were based on the overconsumption of natural capital.

Advances in technology and the accumulation of wealth enable us to build a new world, one far more stable and secure than the one we now have. We can lead a richer, more satisfying life today without jeopardizing the prospects for future generations.

No comments were found for Plan B: Rescuing a Planet Under Stress and a Civilization in Trouble. Be the first to comment!