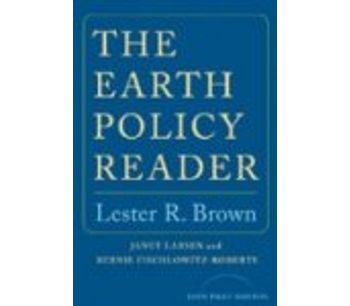 If we have learned anything over the past year, it is that accounting systems that do not tell the truth can be costly. Faulty accounting systems have driven some of the world's largest corporations into bankruptcy, costing millions of people their lifetime savings, retirement income, and jobs.

In The Earth Policy Reader, coauthored with Janet Larsen and Bernie Fischlowitz-Roberts, Brown says the global economic accounting system is misleading us too, but with potentially more serious consequences. Economic prosperity is achieved in part by running up ecological deficits that do not show up on the books. Some of the record economic prosperity of recent decades has come from overplowing land, overfishing oceanic fisheries, overgrazing rangelands, overcutting forests, and overpumping aquifers.

At some point, these expanding ecological deficits begin to reinforce each other. In China, for instance, shrinking forests, deteriorating rangelands, eroding croplands, and falling water tables are converging to expand deserts and create a dust bowl of historic dimensions. The weight of 1.3 billion people and their livestock on the land and the rapid pace of economic expansion has put China on the frontline of the deteriorating relationship between the global economy and the earth's ecosystem.

China is now at war. It is not invading armies that are claiming its territory, but expanding deserts. Old deserts are advancing and new ones are forming, like guerrilla forces striking unexpectedly, forcing Beijing to fight on several fronts. And China is losing the war. The deserts are claiming an ever larger piece of territory each year.

The flow of refugees has already begun, as villages are overrun by sand dunes in Inner Mongolia, Gansu, and Ningxia Provinces. A Chinese scientist doing grassland research in Xilingol Prefecture in Inner Mongolia estimates that if recent trends of desertification continue, the region will be uninhabitable in 15 years. An Asian Development Bank assessment of desertification in Gansu Province reports that 4,000 villages risk being overrun by drifting sands.

The U.S. Dust Bowl of the 1930s forced some 3 million Okies and other refugees to leave the land, many of them heading west from Oklahoma, Texas, and Kansas to California. But the dust bowl forming in China is much larger than that one was, and China’s population of 1.3 billon dwarfs the U.S. population at that time of 150 million. Whereas the U.S. migration was measured in the millions, China's may measure in the tens of millions. And as a U.S. embassy report noted, unfortunately, China's 21st-century 'Okies' have no California to escape to, at least not in China.

China is working to halt the expansion of deserts and to reclaim the lost land, but at this point, the program is not close to being sufficient. Due to spreading deserts and growing water shortages as water tables fall and aquifers are depleted, China's grain harvest is falling. In each of the last three years, the country has experienced grain deficits of roughly 40 million tons. Thus far it has covered the shortfall by drawing down stocks. When it can no longer do that, China will turn to world markets on a scale never before seen. We will not need to read about this in the newspapers. We will see the effect on food prices at the supermarket checkout counter.

The world is also incurring a vast water deficit. It is largely invisible, historically recent, and growing fast. It is a product of the tripling of water demand over the last half-century and the rapid worldwide spread of powerful diesel and electrically driven pumps.

The U.S. Department of Agriculture reports that in parts of Texas, Oklahoma, and Kansas the underground water table has dropped by more than 30 meters (100 feet). As a result, some farmers discovered in the summer of 2002 that their irrigation wells were pumping air instead of water. And water tables are falling in several states in India, including the Punjab, the country's breadbasket. Competition for water between cities and the countryside is intensifying.

The world's farmers are handicapped not only by falling water tables, but also by rising temperatures. During this past summer, farmers in key food-producing regions were confronted with some of the highest temperatures on record. The U.S. harvest has suffered from a combination of record heat and drought, which dramatically lowered the 2002 grain harvest. India's harvest has also suffered from high temperatures, including a heat wave in which temperatures reached 45 degrees Celsius (113 degrees Fahrenheit) in May, killing more than 1,000 people in the state of Andhra Pradesh alone.

Record temperatures are accelerating the melting of ice as well. Several new studies report that the earth's ice cover is melting faster than projected by the Intergovernmental Panel on Climate Change (IPCC) in early 2001. A team of U.S. Geological Survey scientists, using satellite data to measure changes in the area covered by glaciers, described an acceleration of melting glaciers in several mountainous regions, including the South American Andes, the Swiss Alps, and the French and Spanish Pyrenees. Other studies show ice melting faster than anticipated in the Himalayas and the U.S. Rocky Mountains and Alaska. Although less than two years have passed since the completion of the IPCC report, the new data recording the acceleration of ice melting mean that the rise in sea level it projected for this century is already outdated.

The good news is that the world is beginning to recognize the dimensions of the threats that our modern civilization has created for itself. The energy restructuring needed to reduce carbon emissions and stabilize climate is now under way. For example, between 1995 and 2001 world wind electric generation expanded by 32 percent a year while coal use declined slightly, falling 2 percent over the six-year span. In 2001, world wind electric generating capacity jumped by 37 percent. In the United States, it went up by 67 percent.

The cost of wind-generated electricity has fallen from 38 cents per kilowatt-hour 15 years ago to as little as 3 cents on prime wind sites today. And the cost is continuing to fall. Wind is abundant, cheap, inexhaustible, clean, and climate-benign—a set of characteristics that no other energy source can match.

Cheap electricity from wind now offers the option of electrolyzing water to produce hydrogen. Fortuitously, hydrogen is the fuel of choice for the new fuel cell-powered automobiles. Honda and DaimlerChrysler plan to be on the market with fuel cell-powered cars in 2003. Ford plans to enter the market in 2004.

We have the technologies to build a new economy, an eco-economy, one that is compatible with the earth's ecosystem. The key to building this economy is to get the market to tell the ecological truth. Over the past century, the global economy has grown from an output of just over $2 trillion a year to $42 trillion, roughly a 20-fold increase. The indirect effects of the economy on the earth a century ago were minimal. This is no longer the case. Today the indirect costs of various goods and services may exceed the direct costs, the costs that determine the market price. When we buy a gallon of gasoline, for example, we pay for getting the oil out of the ground, refining it into gasoline, and delivering it to the local service station. We do not pay the costs of disrupting the earth's climate system.

We need to calculate the indirect costs of burning gasoline so we can learn the full costs of its use. A model for doing this is provided by the U.S. Centers for Disease Control and Prevention, which in April released a study on the cost to society of smoking a pack of cigarettes. When both the cost of treating smoking-related illnesses and the losses in employee productivity as a result of absenteeism are included, each pack of cigarettes smoked in the United States costs society $7.18. The question is not whether that price is paid. It is paid by the smoker, by the employer, or by the taxpayers who fund Medicare programs.

Calculating the costs to society of burning gasoline means including the medical costs of treating those with illnesses from breathing polluted air, which number in the millions. Other costs to be tallied are the damage to forests, crops, and buildings caused by acid rain and, by far the largest of all, the costs of climate change.

Higher temperatures can wither crops and reduce harvests. They also cause ice melting and rising sea level, which can lead to the loss of ocean-front property, the loss of beaches, and, most important, the loss of agricultural lands. This is particularly important in low-lying countries such as Bangladesh, where a 1-meter rise in sea level would inundate half of the country’s riceland with saltwater. The rice-growing river deltas and floodplains in other Asian countries would also be at risk. The inundation of half of Bangladesh’s riceland would likely produce some 40 million refugees who would have to be relocated. We can only speculate as to what the cost of such a massive relocation would be.

A 1-meter rise in sea level, very much in the range of possibility during this century, would also require the resettlement of the populations of numerous low-lying island countries. The interesting question for us is, What is the cost to society of burning a gallon of gasoline? Is it more or less, for example, than the cost to society of smoking a pack of cigarettes?

Once we calculate these costs, we can incorporate them into market prices by restructuring taxes—reducing income taxes and raising gasoline taxes. If we can get the market to tell the truth, then we can avoid being blindsided by faulty accounting systems that lead to bankruptcy.