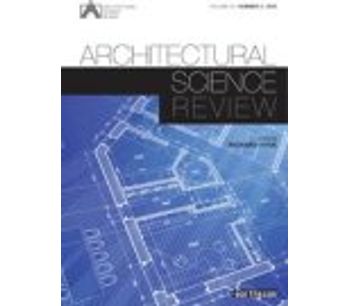 0
Share Share with Facebook Share with Tweeter Share with LinkedIn
Founded at the University of Sydney in 1958 by Professor Henry Cowan to promote continued professional development, Architectural Science Review  presents a balanced collection of papers on a wide range of topics. From its first issue over 50 years ago the journal documents the profession’s interest in environmental issues, covering topics such as thermal comfort, lighting, and sustainable architecture, contributing to this extensive field of knowledge by seeking papers from a broad geographical area. The journal is supported by an international editorial advisory board of the leading international academics and its reputation has increased globally with individual and institutional subscribers and contributors from around the world. As a result, Architectural Science Review continues to be recognised as not only one of the first, but the leading journal devoted to architectural science, technology and the built environment.

All research papers, research notes and review articles are double-blind refereed by a distinguished international Editorial Advisory Board and other experts in the field. ASRE also publishes occasional refereed special issues, invited review papers and editorials, and extensive book reviews.

Soon after Professor Henry Cowan took up the Chair of Architectural Science at the University of Sydney in 1954, he arranged a series of public lectures to fill a need expressed by the architectural profession in the city. The technical and scientific aspects of architecture had progressed so rapidly during and after the war years, there was a need for what is now known as `continuing professional development`, although that name came much later.

The series of lectures presented by leading members of the professions and from the universities were well received, and soon it was decided to publish a collection of them, in a format similar to a technical journal. It became apparent that there were many more papers that would be welcomed, and experienced people willing to write them, and the idea of a continuing journal quickly emerged.

The first issue was published in November 1958, with five full-length papers, a bibliography on climate and architecture, book reviews, a list of publications received, and abstracts from the periodical literature. Professor Cowan`s book reviews continued to be a valued part of the journal until his passing in 2007, by which time over 4500 reviews had been published, all but a few of them by Professor Cowan, but a few also by leading experts in the various fields.

Although structural and constructional issues were of great interest at that time, the bibliography and three of the first five papers were actually devoted to environmental issues: thermal comfort, lighting, and tropical architecture, indicating that the professions` interest in environmental issues stretches back much further than the currently popular oil prices and energy shortages.

Throughout its history, ASRE has endeavoured to present a balanced collection of papers on the wide range of topics that contribute to its broad field, and to seek those papers, where possible, from as broad a geographical spread as possible. Many former students of Professor Cowan from developing countries have gone on to become academics and researchers, and have had the opportunity to publish in ASRE.

Over the years, the Architectural Science Review became a more and more international journal, with individual and institutional (library) subscribers and contributors from around the world, supported by an international editorial advisory board of the leading academics in the field likewise from around the world. ASRE became recognised, and continues to be recognised, as not only the first but the leading journal in the field.

To commemorate 50 years of publication, a function was held in the Faculty of Architecture, Design and Planning at the University of Sydney in 2006. At that time, tribute was paid to Professor Cowan for his foresight and dedication in inaugurating and continuing the publication for half a century.

Professor Cowan passed away in July 2007, having completed the last of his book reviews only a few weeks before. An obituary was included in Issue 50.3 (September 2007).

No comments were found for Architectural Science Review. Be the first to comment!