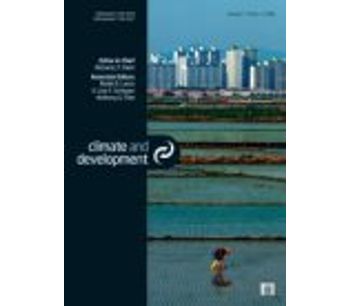 0
Share Share with Facebook Share with Tweeter Share with LinkedIn
The leading international peer-reviewed journal on the links between climate and development. Climate and Development is published by Earthscan and the Stockholm Environment Institute in partnership with the Global Change System for Analysis, Research and Training (START). The journal is supported by the Swedish International Development Cooperation Agency (Sida). It is the first academic journal to provide a forum to communicate research, review and discussion on the interfaces between climate, development and practice.

Climate and Development is the first academic journal dedicated to the range of issues that arise when climate variability, climate change and climate policy are considered along with development needs, impacts and priorities. It aims to make complex analysis of climate and development issues accessible to a wide audience of researchers, policymakers and practitioners, and to facilitate debate between the diverse constituencies active in these fields throughout the world.

The journal provides a forum to communicate research, review and discussion on the interfaces between climate, development, policy and practice. Every three months it presents conceptual, policy-analytical and empirical studies of the interactions between climate impacts, mitigation, adaptation and development on scales from the local to global. Contributions from and about developing countries are particularly encouraged; however, research on developed countries is welcome provided that the link between climate and development is the central theme.

Climate and Development is of direct and vital relevance to academics, policy analysts, consultants, negotiators, industrial and non-governmental organisations, and to all those working to ensure a better understanding of the links between climate and development.
The journal is the platform of choice for academic debate on issues that link climate and development, and invites contributions on all such issues. These include, but are not limited to:

These and other topics are addressed in a number of ways, including:

(N.B. all maximum word counts give below are inclusive of supplementary matter, such as abstracts and references.)

There is now incontrovertible evidence that climate change is happening, and that both its cause and its impacts are inextricably linked with human development. Over the past decades climate change has increasingly been framed as a development issue as well as an environmental concern. Climate and Development is the first journal dedicated explicitly to the links between climate variability, climate change and climate policy on the one hand, and development needs, impacts and priorities on the other.

The idea and subsequent planning for Climate and Development originated from the IPCC Fourth Assessment Report, which was published in 2007. The report contains several chapters that assess climate change in the context of development, as well as regional chapters on Africa, Asia, Latin America and Small Islands. In preparing these chapters, the authors were struck by two issues: (i) there is no single journal in which relevant papers are published, and (ii) most of the relevant papers were written by experts from the developed world.

Climate and Development aims to address both of these issues. First, its Aims and Scope bring together research interests that were previously dispersed over a range of different journals focusing on either climate change or development. The members of the journal’s editorial board have been carefully selected to represent the full spectrum of conceptual, policy-analytical and empirical studies of the interactions between climate impacts, mitigation, adaptation and development, on scales from local to global.

Second, the journal actively encourages submissions from developing-country experts. It seeks to present empirical evidence both grounded in theory and `straight from the field`. For example, it has introduced a manuscript category `case studies`, which allows for the publication of project findings that do not necessarily have to be grounded in a theoretical research framework. These project results might otherwise only be published in internal project documents, and therefore remain publicly invisible, including to IPCC authors. In addition, the journal has initiated a capacity-building activity known as `writeshops`, which provide training and mentoring to developing-country experts with limited experience in academic publishing.

The first issue of Climate and Development came out in March 2009. It was well received, and was followed by a large number of new submissions, securing sufficient material to sustain the publication of at least four issues a year.

The publication of Climate and Development is supported by the Swedish International Development Cooperation Agency (Sida) and the Stockholm Environment Institute, which also hosts the editorial office. Collaboration with the Global Change System for Analysis, Research and Training (START) provides contact with a large network of developing-country experts, and is key in the organisation of the writeshops.

No comments were found for Climate and Development. Be the first to comment!