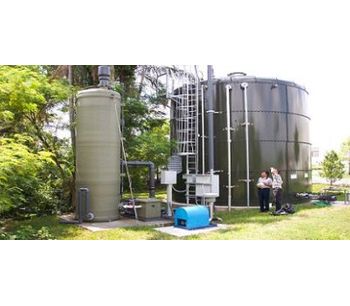 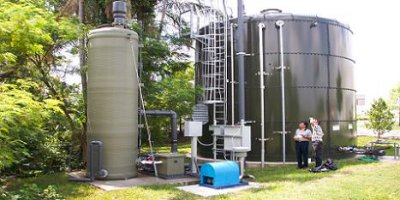 New waste water treatment plants, currently under construction or being contracted for building, are under increased scrutiny, for odor generation and their control methods. There are several myths that have been associated with odor generation, transport and control, which includes the following: (1) the generation of odors is inevitable when treating waste water; (2) odor dilution with ambient air will dissipate the odors with increased distance from the plant; (3) odors can be masked effectivelyby injecting masking agents; (4) control of odors is expensive; and (5) if plant is being located far from residential areas, odor control is unnecessary. However, it is clear from the above-mentioned trends, that waste water treatment plants operating beyond the year 2.000 will have to utilize odor control measures and operate under essentially a self imposed zero-odor emission requirement, to ensure that no complaints from neighbors are received now or in the future.

There are several odor control methodologies that have been developed for reducing or eliminating odor emissions, which includes the following:

Each of the above methods either by themselves or in combination with others have to be designed on a case-by-case basics to minimize cost and maximize effectiveness. Generally, odorous emissions from waste water treatment plants consists of a mixture of organic compounds, such as ketones, aldehydes, etc. and inorganics, such as hydrogen sulfides, inercaptans, etc. Odor control methods must be capable of handling both the organic as well as inorganic odorous compounds.

In recent years, the use of biological control methods has increased mainly due to the following advantages: (1) requires ambient temperatures and pressures; (2) is capable of treating both organic and inorganic odorous compounds; (3) does not require handling of corrosive chemicals; (4) minimal operating cost, when compared with chemical oxidation and thermal destruction methods; (5) robust, and can operate reliably with minimal operator intervention. Another major advantage of biological control methods when compared with chemical oxidation, is that it generates no chemical by-products. For example, use of chlorine gas or hypochlorites, results in the chlorine gas emissions, which has a pungent odor. In some waste water treatment plants, where chlorine gas is being used to control odors, complaints from neighbors are due to the pungent odor of chlorine rather than the sewer odors. Further, chlorine gas chemically combines with organics, present in waste water to form halocarbons, which are known to h2 carcinogenic compounds and possess objectionable odors. The potential for an increase in chlorinated volatiles should be considered before using chlorine in waste water treatment plants.

Traditionally, biological control methods have used naturally bioactive media, such as compost, peat, wood chips, etc., which have tended to be large size, shallow beds, with limited bioactive media to be changed periodically, due to increased pressure drop, and limited availability of nitrogen and phosphorus nutrients.

The use of odor control methods in waste water treatment plants is essential in the future. New plants must incorporate an 'optimal' combination of odor control methods which control methods or biofilters are 2aining popularity and their use must be carefully considered when evaluating odor control methods. Usually, it is necessary to consider an 'optimal' combination of odor control approaches rather than one single method, especially in a large waste water treatment plant, which will have several odor emission sources. The use of traditional biofilter using naturally bioactive media is effective when the inlet odorous gas stream satisfies several essential conditions, such as humidity, temperature, types of odororants and their concentrations, and flow rate. Biotrickling filters using synthetic media are more effective than biofilters using naturally bioactive media, if the synthetic support media is designed to maximize biofilm adherence and minimize plugging due to biomass growth.

No reviews were found for Advanced Odor Control Technology. Be the first to review!