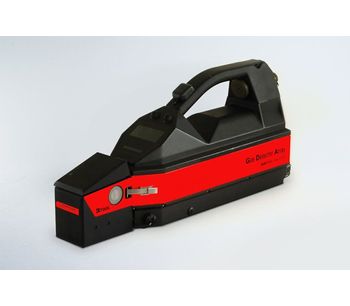 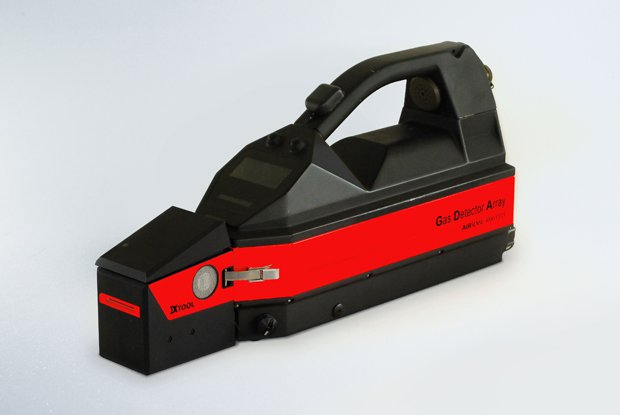 The GDA-X is the newest addition to our successful GDA series. The GDA-X has the same scope of work as the GDA-FR, which is able to detect chemical substances and dangerous gaseous compounds, with an improved mode of operation for detecting slow-evaporating substances including many explosives.

The explosive detection mode of the GDA-X provides a quick analysis of samples which are taken with a special wipe sampling pad from suspicious items within a few seconds. For this mode the X-TOOL is attached to the front in which slow-evaporating substances desorb into gaseous state for analysis.

Furthermore there is an additional equipment option for the GDA-X: a X-ray and gamma detector (Geiger counter). This upgrade mainly serves to prevent human losses during nuclear events. By upgrading the GDA-X with the Geiger counter detection of high-energy radiation (X- and γ-radation) as well as a broad range of dangerous substances with only a single analytical instrument is possible.

Our GDA-X instruments are mostly used at major events, including the Turin Winter Olympic Games in 2006, the 2007 G8 Summit at Heiligendamm, Expo China 2010, the Sochi Olympic Winter Games in 2014, and the 2014 FIFA World Cup, ensuring the safety of participants and visitors.

For hazardous chemicals and traces of explosives
The standard GDA commonly used to detect and identify hazardous gaseous compounds has been improved to allow the detection of explosives. The hybrid Gas Detector Array (GDA) is a gas detection device with multiple sensors which allows detecting a broad range of hazardous gases with high specificity.

All the sensors (IMS, PID, EC, 2xMOS) from the array deliver complementary information about the detected compounds. The sensor signals are evaluated and compared with the library. In case that there is a match, the name of the compound and its concentration is displayed.

Extending this technology for the detection of explosives requires evaporation of some explosive materials with very low volatility and some modifi cation on the detector.

This has been achieved with a special tool using high temperatures to vaporize those materials and therefore enabling a response from the sensors. With added explosive detection capabilities, the GDA-X offers an added value to the public safety regarding explosive material and hazardous chemicals in a portable design. For the detection of chemical gas hazards the GDA is simply turned on and ready to be used as a broad range detector for TICs and CWAs. At normal temperatures high volatility explosives such as TATP are already detectable.

To detect further explosives with low volatility, it is required to perform three steps:

After some minutes the system and the tool are ready to initiate the analysis.

Using a special fi ber tape, the user wipes the sampling area and inserts the tape in the tool tray.

An analytically closed system ensures that no chemicals are lost and the whole procedure is carried with optimized sensitivity and without the danger of overloading and contaminating the system for a longer period.

Once reaching the adequate measuring temperature, the tape is placed in the desorber tool for about 20 seconds. The result is shown immediately on the display.

Important Features of the GDA-X

No reviews were found for AIRSENSE - Model GDA-X - Explosives Gas Detector Array. Be the first to review!