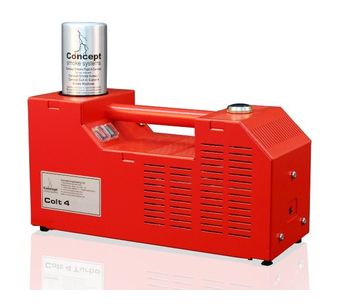 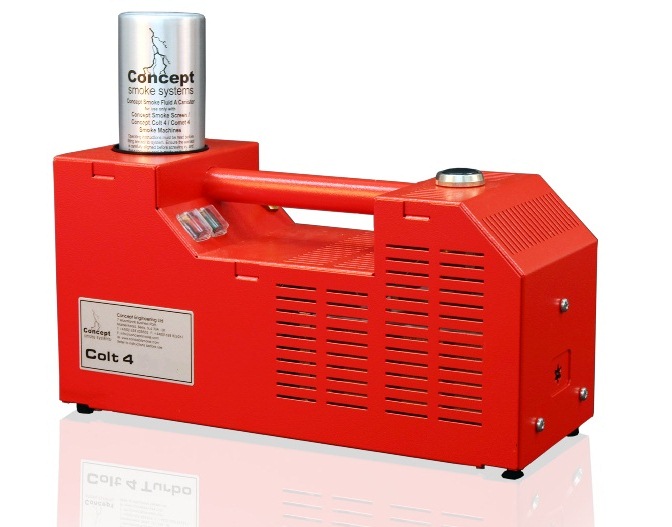 The best selling Concept Colt has the ability to produce a considerable amount of smoke 'off power' using the retained energy within the high mass heat exchanger, allowing an operator to carry a generator from room to room, making smoke as required, without a trailing electrical lead. In service with numerous fire authorities world-wide, many NATO forces (including the USN and Royal Navy for shipboard training), as well as analytical laboratories, asbestos removal specialists, and HVAC and LEV contractors, the Concept Colt has an enviable reputation for simplicity of operation and reliability.

The Concept Colt 4 variants are particularly suited to applications where extremely dense concentrations of smoke are required, or large volumes need to be smoke logged. This is because of the very persistent nature of the smoke produced. The Colt 4 Turbo has a larger 2.2kw heat exchanger resulting in almost twice the smoke output - it is one of the most powerful hand held smoke generators available today.

The resulting smoke from the Colt 4 has a particle size of just 0.2 - 0.3 micron mmd. The smallest particle size in it's class. This compares to typical entertainment smoke systems that have a particle size of 1-5 microns. This means the Colt 4 doesn't just create the most persistent water based smoke available, it is also the safest. In normal operation, once the smoke has been produced and vented the class leading particle size of the Colt 3 & 4 means that there will be no discernible residue.

Both the Colt 3 & 4 smoke generators come with a precision machined heat exchanger that is guaranteed for life!

Remote operation is available on both units. A choice between a wired remote and radio remote control to suit all applications.

The Concept Colt 3 is better suited to applications where a smoke effect is required, but the effect needs to be of short duration. The resulting smoke from the Colt 3 is thicker, whiter but will disperse in just a few minutes.

All Colts use a one piece aluminium canister that contains the smoke chemical and inert propellant gas required to make smoke. The canisters automatically re-seal after use, so they can be used time and time again until exhausted.

Re-fillable aerosol cans are also available if required which can simply be pressurised by a hand pump, airline or inert gas supply.

No reviews were found for Concept - Model Colt 3 & 4 - Smoke Machines. Be the first to review!