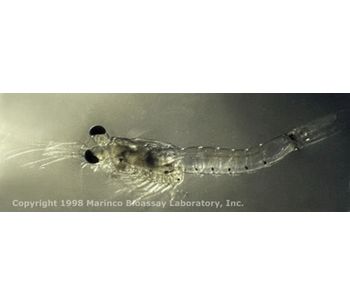 Adult mysids range in length from 4.4 mm to 9.4 mm.  Living mysids are usually transparent, but may be tinted yellow, brown, or black.  Females are usually larger than males, and sex can be determined when a body length reaches 4 mm.

Ecology: Mysids are small shrimp-like crustaceans found primarily in the Gulf of Mexico and the eastern coast of Florida.  They commonly occur at salinities above 15-ppt and are found in greatest abundance at salinities near 30-ppt.

Culture and Care: Stock cultures may be maintained in continuous-flow or closed recirculating systems.

Other Uses: Used as a live food source for seahorses, seadragons, and pipefish.

No reviews were found for MBL - Americamysis Bahia (Mysidopsis Bahia). Be the first to review!