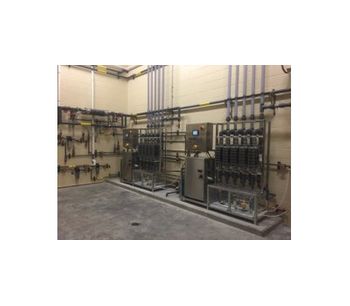 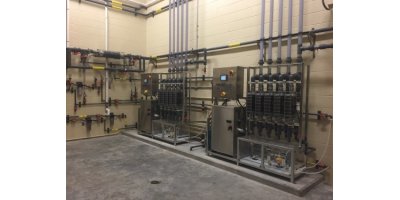 Microclor On-Site Hypochlorite Generation (OSHG) is the safe, reliable and sustainable solution for water or wastewater disinfection. As concerns mount regarding the safety and security of using chlorine gas for water disinfection, many utilities are choosing sodium hypochlorite (bleach) as a safer alternative. In weighing the implications of either concentrated, delivered bulk bleach or on-site generated hypochlorite, utilities are considering factors such as safety, truck traffic, price variability, sustainability and overall life-cycle costs.

The Microclor dilute (0.8%) hypochlorite solution is below the hazardous material concentration threshold of 1%. This stable concentration reduces operator HazMat exposure and eliminates the need for further diluting commercial bulk hypochlorite to reduce the amount of degradation or decomposition which creates dosing issues due to changing concentrations over time - especially in warm weather.

The only raw materials required for the OSHG process are common salt, water and electricity. This will reduce vendor deliveries by 66% vs. commercial bulk hypochlorite. Less truck traffic through the community and at the facility will reduce the potential for accidents and reduces the associated carbon footprint, Improving efforts towards Green Facility Management and also improving the water security profile.

Utilizing Microclor OSHG allows for the storage of larger quantities of raw materials necessary for your disinfection process (salt). The result is a more hardened and robust treatment facility better able to withstand the demands imposed by a natural disaster or health emergency.

Since all chlorine compounds are derived from salt, electrolytic conversion at the treatment facility will typically result in significant savings to the owner. In many cases, it costs 30-70% less to produce sodium hypochlorite versus buying it. Additionally, price swings in the price of bulk hypochlorite are difficult to predict and can create significant budget variances. In contrast, the raw materials consumed by an OSHG system are much less volatile and easier to manage.

The Microclor® onsite hypochlorite generation system (OSHG) incorporates a multitude of patented unique and novel features. The most significant features are as follows:

There is no other OSHG system in the marketplace that possesses the same combination of thoughtful design and innovation.

Cells are configured in a vertical format with a recirculation loop on each cell that allows for optimized brine utilization and passive release of the hydrogen gas from each cell. Hydrogen gas is prohibited from passing from cell to cell. The design radically increases operator safety and substantially reduces the possibility of hydrogen gas build-up in the cell and the potential of catastrophic failure. Additionally, by removing the hydrogen immediately from each cell, the configuration eliminates the blinding of the electrodes by hydrogen gas bubbles.

Constant current is achieved via a current feedback loop where the brine pump speed is controlled by the system programmable logic controller (PLC). This feedback loop accounts for variations in temperature, conductivity and water flow. The titanium and Teflon impregnated gear pump is attached to a variable speed drive that continually provides a consistent blended electrolyte flow to the cells which maximizes salt efficiency.

The D.C. Rectifier design consists of a fully isolated step-down transformer and bridge rectifier. D.C. voltage is fixed with primary taps for ±5, 10.0% voltage correction. D.C. ripple is less than 4.0% with a power factor of 99% or better. Importantly, switching rectifier or phase angle fired SCR voltage correction technology is not utilized on the Microclor OSHG system as that type of twenty year old technology has low reliability.

The electrolytic cells consist of thirteen internal bipolar electrodes while the cell outer body serves as both terminating anode and cathode. All anodic surfaces are coated with DSA catalytic coating. The design of the cell precludes the need for wet D.C. cable connections.

The passive hydrogen gas removal design provides a hydraulic lift within the cell and creates a high velocity through the recirculation loop and across the cell plates. This high velocity flow results in a scouring action between the vertically mounted cell plates. The novel self-cleaning feature virtually eliminates the need for acid cleaning of the electrolytic cells and reduces heat build-up.

The Microclor vertical cell produces hypochlorite at 0.8% while consuming less than 3 pounds of salt and 2.0 A.C. KWH per pound chlorine equivalent chlorine.

No Internal Cell Baffles or Gasketing

There are no internal cell baffles, gaskets or fasteners found inside the cell construction. The cells are built with clear acrylic guides that support the internal bi-polar plates and allow for direct visual inspection of the plates -which aids in verifying proper operation. Anode and cathode mono-polar plates are surface mounted to the outside of the acrylic guides.

The Microclor vertical cell design allows for each cell to easily be removed from the cell carrier piping by simply breaking two unions. This makes for simple cell maintenance and or replacement.

Below is an example of a typical process and instrumentation diagram for all Microclor systems. The generator size will vary depending on the chlorine demand. The arrows show where and how the water moves through the entire system as well as where the hydrogen gas that vents out the top of the system.

No reviews were found for Microclor - Onsite Hypochlorite Generation System (OSHG). Be the first to review!