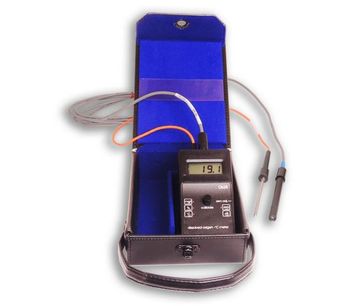 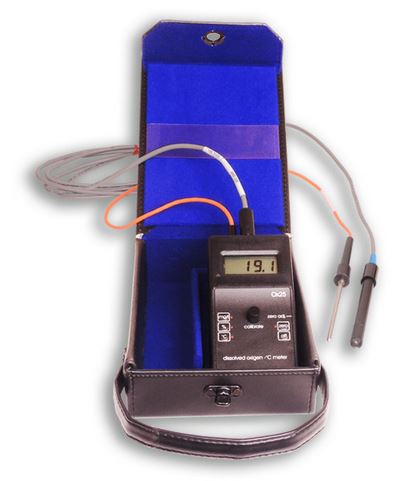 The OX25-K Portable Dissolved Oxygen Meter is designed to offer accurate measurement of the saturation and concentration of dissolved oxygen in process or environmental applications, whether in laboratory, field or industrial environments.

The OX25-K is supplied as a complete Dissolved Oxygen measuring kit complete with the OX25 conductivity meter; a dissolved oxygen sensor with an integrated temperature measuring device, for automatic temperature compensation, complete with a professional looking carrying case.

The OX25-K is supplied complete with model O23-IP3 Polarographic DO2 sensor and a separate temperature sensor (model ST11) so that dissolved oxygen readings can be initiated immediately.

The OX25-K portable dissolved oxygen meter is capable of the following ranges with the associated resolutions:-

Please note that the automatic temperature compensation corrects from a range of 0-40°C.

The Polarographic sensor is powered from the instrument and provides accurate dissolved oxygen readings.  Automatic temperature compensation is achieved via the integrated temperature measuring devices.

The ST11 is a separate temperature measuring device which allows the instrument to show the measured temperature of the solution.

The OX25-K Dissolved Oxygen meter measures the partial pressure of oxygen held within the measured solution. During manufacture, the OX25-K is set-up with factory calibration to show the oxygen contents in water at a barometric pressure of 760mm / Hg or 1013 mbar.

The OX25-K is required when barometric pressure differs significantly from 1013 mbar such as at elevated altitudes. The instrument can easily be calibrated by % saturation to ensure that future readings in both % Saturation and mg / L (ppm) are correct for the reduction in barometric pressure / increase in elevation.

When used in mg/L (PPM) mode, the OX25-K needs to be calibrated to ensure that the measurement remains correct. We would strongly recommend measuring the conductivity of the solution to give an accurate figure for salinity in g/l.  This figure can the be used in conjuction with the % Saturation figure to give an accurate concentration measurement in mg/L according to the chart shown below:-

The OX25-K is designed for use as a precision device enabling both quick and accurate dissolved oxygen measurements to be made.

Easy to setup and simple to calibrate, the OX25-K can also be used where the barometric pressure may vary and is perfectly suited for use in applications where the salinity of the measured solution is variable.

No reviews were found for Model OX25-K - Portable Dissolved Oxygen Meter. Be the first to review!