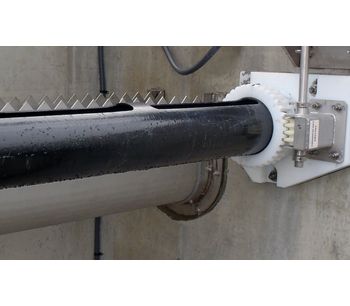 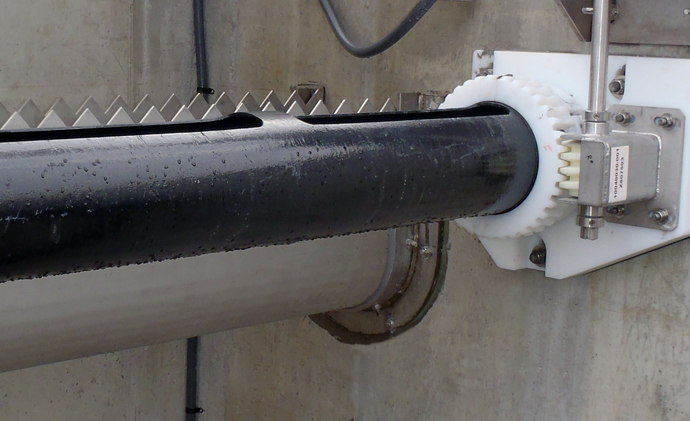 Rotary scum skimming troughs are the most economical method for removing all grease, scum, and other floating materials from the water surface in rectangular clarifiers. Scum troughs can rotate up to 75 degrees both forward and backward to accommodate changes in water level and collect surface material from either side of the trough. Slotted weirs are cut longitudinally along the top of the trough, evenly distributing flow throughout the length of the trough and generating a flushing action to discharge collected material.

The primary component of the rotating scum trough system is a pipe with 60-degree-wide slotted weirs, cut symmetrically about the vertical axis and parallel to the longitudinal axis of the pipe. The weir slots can be up to 30 inches in length and are separated by 2- to 3-inch stiffening bands, which are sections of pipe left intact for structural integrity. In the pipe's neutral position the weirs are above the water surface. The pipe is then rotated forward or backward to collect scum from either side of the weirs.

The wall bearing assembly supports the trough and allows it to rotate easily with water-lubricated bearings. Each assembly consists of a bearing, bearing housing, wall plate, seal, and gasket. Component materials are determined by the type of the system (metallic or non-metallic).

The worm gear assembly consists of a stand used to mount the handwheel or actuator, a shaft pipe to turn the worm gear, a wall-mounted worm bracket, a gear stop to avoid over-rotation, and a nylon worm that engages the UHMW-PE gear attached to the scum trough. The worm and gear half are both non-metallic to prevent increased wear caused by corrosion. All bearings are water-lubricated UHMW-PE to eliminate the need for grease lines, thereby lowering maintenance time and cost. The worm gear design provides a high mechanical advantage, decreasing the torque required by the operator or actuator.

No reviews were found for Polychem - Rotary Scum Skimming Troughs. Be the first to review!