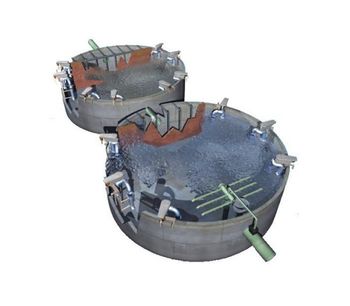 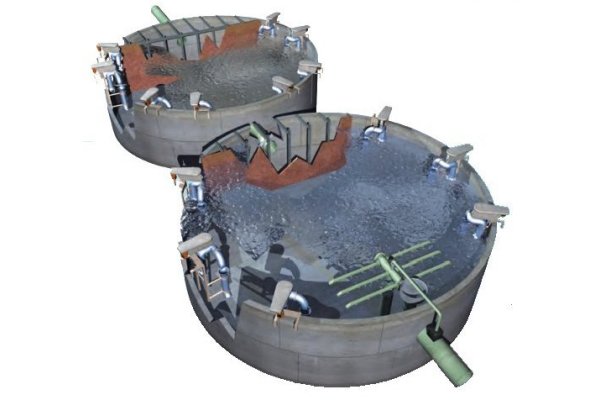 The process is designed on a case by case basis. The design elements are flexible, allowing locally available forms or existing tankage to be utilized, minimizing construction time and cost. A single treatment train is optimal up to 30,000 EP.

The process combines the performance benefits of conventional continuous flow processes incorporating aerobic-anoxic reactors and simplicity and cost benefits of Sequencing Batch Reactors (SBRs). This offers operational advantages and significant cost savings over other BNR technologies, from construction through to long-term maintenance to operational life of the plant.

The process design of the PWTech Hybrid BNR system has many features that give this process significant advantages over alternate processes.

All PWTech HBNR plants are designed to achieve high levels of
denitrification, even if regulations don't require this, resulting in:

The PWTech HBNR system employs a shallow tank design rather than deep tanks. This gives improved solids capture due to:

Use of the GLS decanter offers several advantages over other decanter designs including:

The key objective of the PWTech HBNR Process design is minimizing solids in the effluent and maximizing process stability. Because denitrification is an important step, even where regulatory permit requirements for effluent quality are not high, the process still achieves very high quality effluent. Typical effluent quality figures (95th percentile) are presented in the accompanying table. These show the effluent qualities for a standard hybrid BNR plant where consent limits are not too stringent, and for a full BNR plant to meet the most stringent of regulatory requirements.

Twin circular tank construction offers savings in construction time and cost. Design elements are flexible, allowing the use of locally available concrete forms. In some cases existing tanks or ditches may be used, allowing conversion from secondary treatment to BNR without additional tanks.

The first tank is the aerobic-anoxic tank (AAT). It has an anaerobic selector (when configured for bio-P removal) followed by a sequencing aerobic/anoxic zone. Flow continuously enters the anaerobic selector along with recycled sludge from the AAT (R-recycle). The flow then passes into the sequencing aerobic/ anoxic zone. Cycles consisting of periods of aeration followed by periods of non-aerated mixing occur in this tank. The cycle times are varied depending on the time of day and according to dissolved oxygen levels in the tank.

The second tank is an intermittently operated clarifier (IOC). The IOC operates as a sequencing aerobic and anoxic reactor as well as a clarifier. Flow enters the IOC from the AAT through an energydissipating baffled section. Like the AAT, the aerobic and anoxic phases of operation are cycled. Sludge (S-recycle) is recycled from the IOC to the AAT tank during the aeration/anoxic mix period.

Aeration is supplied by either patented Sinkair aerators for smaller plants or diffusers for larger plants or where minimum energy consumption is required. Mechanical surface aerators can also be used.

Fluid in the IOC tank builds to a pre-set level and then the aeration, mixing, and sludge return are stopped and the sludge is allowed to settle for a pre-set time. Following this settling time the clear supernatant from the top of the tank is decanted.

The GLS decanter, a simple but clever patented decanting system, is used to decant the supernatant. It has no moving parts and is designed to allow decanting of the effluent at a much lower effective weir loading rate than conventional mechanical weirs. This minimizes the risks of mechanical problems and solids loss to the effluent. The figures opposite show the operational cycle of the IOC with a GLS decanting system.

The whole process is controlled by a PLC and SCADA system designed to maximize process performance and minimize operator requirements. Most plants operate unattended. Figure 9 shows a typical main plant screen for the SCADA system.

No reviews were found for PWTech - Model HBNR - Hybrid Biological Nutrient Removal. Be the first to review!