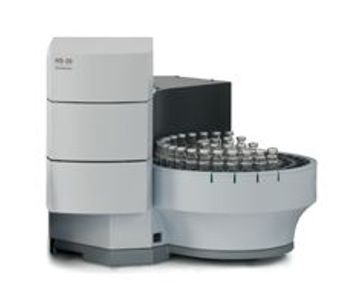 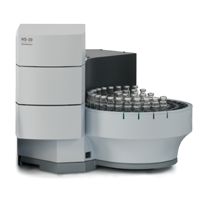 Premier Solution for Volatile Component Analysis: Principle of headspace (HS) analysis: A sample is sealed inside a HS vial, and the VOCs in the sample are allowed to reach equilibrium between the gas and liquid phases using temperature, agitation, and time. The vial is pressurized and a portion of the headspace is sampled for analysis.

The HS-20 Loop Model is designed to be used for traditional static HS applications and methods using the pressure-loop sampling technique. The HS-20 LongTX Model is identical to the HS-20 Loop Model, but interfaces to the GC-2014 gas chromatograph through a longer (60-inch) transfer line.

The HS-20 Trap Model can be used for the traditional static HS applications, and for applications requiring greater sensitivity via the HS-trap technique. Volatiles from the HS are sampled up to 10 times, and concentrated on a Peltier-cooled adsorbent trap prior to desorbing to the GC or GC/MS for analysis.

Analysis of volatile components by the HS technique is used for environmental samples, materials characterization, pharmaceutical residual solvents, determination of blood alcohol, and a wide range of other applications.