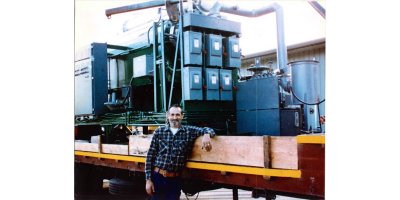 Thermal-static internal Pyrophinic system (TiPs) is a methodology that combines several existing sciences into and single unique processing technology.  It has the proven ability to convert carbon-based matter such as scrap tires, petroleum based waste products and primary resource materials into value-added product streams.

By combining elements of electrolysis, thermal distillation, refining principles and catalytic relationships, the technology will remove greater than 99% of all hydrocarbons and convert them into oils, dry carbon based solids and process gas.  TiPs does not use solvents, no addition of catalysts, no excessive heating and can be operated with almost zero environmental impact.

The TiPs process is like no other. It is a profitable alternative over existing technologies. Recycling tires produces a unique multi-component oil/solvent that has been used extensively in oilfield applications. TiPs does not require the use of government incentives (like tipping fees) to be economic. By design, the process utilizes benefits from existing technologies and combines those benefits into a single process methodology. The result is that TiPs can process materials faster at lower temperatures and produce higher quality products.

Some TiPs Advantages over other technologies are as follows:

The technology has been under development for over 40 years, beginning with the work of Carl M. (Mike) Wilwerding, a process chemist, whom invented and built small scale prototypes to demonstrate new concepts in the carbon distillation of solids. Starting in 2004, the economics of the process pushed for larger scale development resulting in several commercial scale operations. These upscale machines successfully processed significant quantities of various feedstock materials. Scrap tires is the largest volume of material tested with 1.5 million pounds processed (equivalent to 75,000 passenger tires). Other feedstock material tested include coal, Athabasca oil sand, shale rock, plastics, biomass (corn and woodchips) and medical waste. An early prototype of the technology processed auto-fluff which is a by-product of automobile recycling: observed and reported by the US EPA in 1988.

Medical Waste
processed for US Technologies in 1999. Predominately plastics producing higher ratios of process gas and oils (comparative to a #3 diesel fuel)

Grain/Corn Processed
Texas A & M University established a comparative with current ethanol and bio-diesel processes. The results of processing 2500 lbs showed a 15% extraction of oil and 75% recovery of solids completely in the form of a carbon black that matches the type used for the carbon filter industry.

An independent study of the process observed that the multi-component mixture of the process solvent enabled it to dissolve the entire spectrum of waxes and asphaltene deposits.  The study recommended the solvent as being used to break down asphaltene and paraffin buildup in oil field operations.

Sovent created from processing tires has been successfully tested in tank bottom and downhole treatment applications.  It was applied to over 100 low producing (.5-5 barrels/day) stripper wells.  With servicing applications of two to eight barrels of solvent per well, customers saw increases in production volumes upward to 300%.  The solvent was also tested successfully for the cleaning of tank bottoms and product flow lines.

An added benefit of the solvent is the low ratio requirements that can be used to break emulsions (water oil separation).  For example in a test on a 1000 gallon frac fluid tank, five (5) gallons of the solvent broke the emulsion barrier allowing for the recovery of 20 barrels of oil in approximately three hours. Traditional methods to accomplish this same result using other solvents usually require external heating of the tank and may take over 3 days for recovery.  The solvent continued to show significant performance even after it was mixed and remixed in several additional tanks.

Process solvent has been tested by the University of Tulsa, as a defoaming agent in refinery coking units. The Research Center suggested that “the market potential [of the solvent] as a de-foaming agent would consume more tires than the U.S. discards yearly”.  The solvent also has the proven ability to reduce viscosity of API gravity 6 thru 14 oils to meet pipeline specification requirements of 20 API or above.  A private lab verified that the effective viscosity reduction achieved in Utah oil shale simulations were accomplished at ratios of 1:500.  These tests showed high potential of using the solvent to enhance in-situ heavy oil production.  Another study claimed that at the ratios demonstrated to reduce formation viscosity by the solvent can dramatically lower the costs of cyclic steam and CO2 flood enhanced recovery schemes.

Overall, TiPs solvent has potential of being used in a variety of end use applications, including:

This process has been observed and tested by several independent agencies, including,

The TiPs process began 40 years ago from a concept created by inventor Carl (Mike) Wilwerding.  Mike dreamed of the day when he could clean the world of its garbage using a simple system to reclaim waste components back into their original elements.   Based off of his patented thermal decomposition apparatus, Mike refined the technology and developed it over the years to process a variety of waste streams including municipal garbage, sewage sludge, manure, aluminum oil, rubber, bleaching clays, PCB’s, plastics, diatomaceous earth and chicken waste.  Each processor was carefully designed to ensure that the chemical reaction was stable, sustainable and the net energy balance was positive.

In 2004, a team led by Phillip Cauley (currently the CTO of Fulcrum) began to build progressively larger plants until a baseline criterion for a commercial application was reached.  Phil and his team successfully scaled up the technology, proving it could run various feedstock materials at high throughput rates.

In 2011, after several years of development, Fulcrum Environmental Solutions was formed to manage the world wide IP technology rights to the Wilwerding process.  Because of its one-of-a-kind methodology, Fulcrum believed the process should have a distinctive name that can identify it to the world as being unique.  TiPsTM terminology was formed, an acronym for Thermal Static internal Pyrophinic System.

There is only one TiPs process available in the world today and Fulcrum is ready to unlock it's endless potential.  It is a proven and highly effective technology that will make waste recycling profitable.

No reviews were found for Thermal-Static Internal Pyrophinic System (TiPs). Be the first to review!