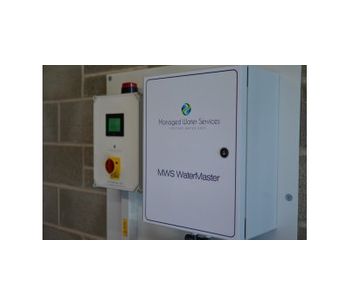 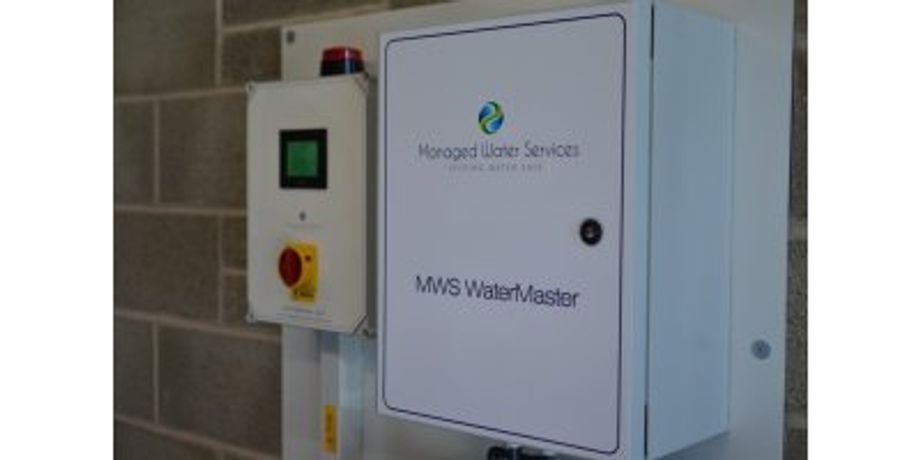 The MWS Water Master is an automatic dosing system designed to dose potable and domestic water systems. It is capable of delivering 0.5ppm (or more if required) Chlorine Dioxide residual levels on a wide range of applications. It includes a PLC controlled dosing unit that can be linked to a building management or on site alert system. The unit is pre-packaged and can be retro-fitted to most water systems.

All moving parts of the unit are fully serviceable...

All moving parts of the unit are fully serviceable and no operational restrictions are placed to allow most competent specialist contractors to carry out service if required.

The MWS Water Master can be retro – fitted to your system or included in new build applications. Full service packages and supply of pre-cursor and activator chemicals are available from Managed Water Services Ltd.

What is Chlorine Dioxide?

Chlorine dioxide (ClO2) is a gas with strong Oxidizing properties. An “oxidizing agent” removes electrons from reactive molecules. By this process, ClO2 quickly neutralizes and eliminates odours, acts as a bleach, and also breaks the cell wall of micro-organisms. ClO2’s action is rapid on most micro-organisms and is unique in its ability to kill bacteria, virus, fungus and spores. Chlorine dioxide was first discovered in 1811 by Humphrey Davy. Today, ClO2 is primarily used as a disinfectant for municipal water supplies, especially those with odour and taste problems. It is also extensively used as a bleaching agent in the pulp and paper industry instead of chlorine, since chlorine was found to produce carcinogens. Some newer applications for ClO2 include the disinfection of fruit, vegetables, meat and seafood, the treatment of medical waste, and as a sanitizer in the canning industry and also on small water system.

Chlorine Dioxide is an excellent biocide that is effective in a wide range of water systems and is used widely as disinfection agent. It will not only kill the bacteria on top of the bio-film it will also penetrate the bio-film and help to break it down and kill pathogens that are buried within.

While chlorine dioxide has “chlorine” in its name, its chemistry is radically different from that of chlorine. As we all learned in high school chemistry, we can mix two compounds and create a third that bears little resemblance to its parents. For instance, by mixing two parts of hydrogen gas with one of oxygen – liquid water is the formed. We should not be misled by the fact that chlorine and chlorine dioxide share a word in common. The chemistries of the two compounds are completely different.

Chlorine dioxide is generally accepted to be, more powerful, easier to use, and more environmentally friendly than equivalent chlorine treatments. It is a more expensive treatment, but its superior environmental performance means that it is rapidly replacing chlorine in a number of applications.

No reviews were found for Chlorine Dioxide Generators. Be the first to review!