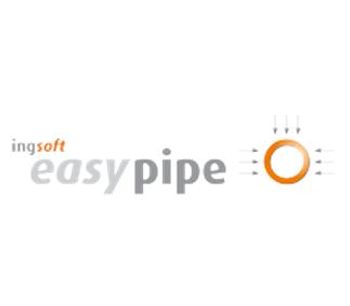 Software for structural calculations of buried pipes. IngSoft EasyPipe combines a variety of calculations in accordance with international standards (i. e. AWWA M45) and for jacking pipes in accordance with DWA-A 161. Further modules which correspond to other standards may be added at need. This includes module A127, A161 and M45. Language modules allow for an international use of the software. The pipe calculation software IngSoft EasyPipe is available in three different editions with different features: standard, professional and enterprise edition. A brief overview of the different performance features is given below.

Performance features of the standard edition

Calculation module A 127 (Pipes in trenches and banks, drains and sewers)

The calculation module A 127 is suitable for the calculation of pipes installed in trenches and banks as well as for drain and sewer calculation. This module is based on the ATV-DVWK standard A 127, 3rd edition, in August 2000. It allows for the dimensioning of pipes consisting of all materials mentioned in this standard.

Driven pipes can be statically designed using the module A161, which is based on the 2nd edition of the DWA standard A 161. This standard is the first DWA standard which contains rules for the structural calculation of pipes according the current DIN standards (Eurocode) which work with partial safety coefficients. This module already is available, using the draft of the standard.

The M45 published by the American Water Works Association (AWWA) is a manual for fiberglass pipe design which meets accepted in many parts of the world. The buried pipe design is part of the manual. The calculation described in M45 (2dn edition, 2005) corresponds to the module M45.

The module SIA 190 is used for structural calculation of sewers. It corresponds to the Swiss standard SIA 190, published in 2000. This module allows for a calculation of flexible pipes. Rigid pipes are intended to be realized at the end of 2012.

Besides the consideration of different modules, an additional licensing of language modules is available. It is possible to switch the language of the user interface and generate print-outs in again another language. For instance a user can work with an English user interface to enter his data but can print the results in German. Textual content such as project names are not translated automatically. Further information about possible combinations of language modules and the respective calculation modules is available on request.

No reviews were found for IngSoft EasyPipe - Software for Structural Calculations of Buried Pipes. Be the first to review!