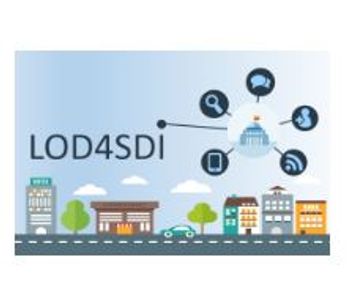 Linked Open Geographic Data for Enhanced Spatial Data Infrastructures. The publication of spatial data as Linked Open Data (LOD) facilitates their aggregation, processing and analysis with other data and maximizes the value of geographic information. Thanks to their open and standardized format, LOD can be accessed and reused by any computer application and can be crossed and linked automatically with other heterogeneous information, without any human intervention, but simply with machine to machine (M2M) operations.

To ensure the web publication of its own geospatial data as open and linkable data, ISPRA (the Italian Institute for Environmental Protection and Research) adopted LOD4SDI, a solution developed by Planetek Italia that automatically generate LOD, according to the standard RDF/XML, using the cartographic web OGC® services (WFS, CSW etc) provided by Spatial Data Infrastructures as input data. The system was implemented with the aim of publishing the ISPRA geographic data on the web as LOD and making them available in an open way and usable efficiently and transparently.

LOD4SDI is designed as an extension that can be integrated into existing SDI platforms and, thanks to its compliance to INSPIRE standards, can be used with any system adopting these standards. As a great advantage, no adjustment is then needed to the infrastructure that receives it. LOD4SDI is the bridge between the INSPIRE GeoData and the INSPIRE Ontologies, improving the SDI with a new access channel based on the Sparql End-Point.

The LOD4SDI’s workflow can automatically manage the geospatial data, generate the RDF/XML through Ontologies, store the LOD in the Triple Store DataBase and publish a Sparql End Point. By using several Ontologies, LOD4SDI becomes an essential element of an SDI.

The reference data used by ISPRA in its first implementation are the European Corine Land Cover 2006 and 2012. The ontologies considered are those already known and widely accepted of the harmonISA project, which define the semantic descriptions of use of the territory and categories of land cover. LOD4SDI is also designed in view of the update the Corine using the Copernicus data.

Thanks to LOD4SDI several advantages are achievable: a full standardization of open data, their indexing on search engines, their connection with other open data published on the Web and their full accessibility for anyone who wants to access, extract, download in various formats, and cross data with other linked data available.

Is a solution developed by Planetek Italia that meets the needs of the Italian Public Administrations to share their open data, in compliance with European PSI (Public Sector Information) Directive on the transparency of the information of public interest.

The Open Data is a key element in the Open Government strategies critical to foster greater administrative transparency in action, the active participation of citizens in decision- making processes.

LOD4SDI is designed as an extension to be integrated in existing SDI platforms and, thanks to its full compliance with INSPIRE standards, for use by any system that adopts such standards.

The infrastructure that integrates LOD4SDI does not need any modification. LOD4SDI is able to automatically generate Linked Open Data (LOD) according to the RDF / XML standard, using the cartographic web services OGC (WFS, CSW, etc.) provided by Spatial Data Infrastructures (SDI) as input data. LOD4SDI makes possible a full standardization of open data, their indexing on search engines and their connection with other open data published on the Web. Thanks to LOD4SDI, data can be extracted, downloaded in various formats and crossed with other linked data available on the LOD cloud.

No reviews were found for lod4sdi - Linked Open Geographic Data Software. Be the first to review!