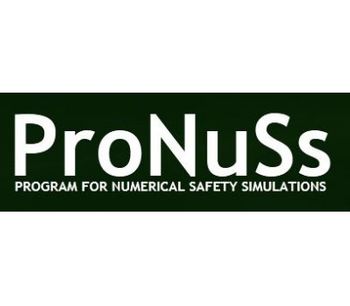 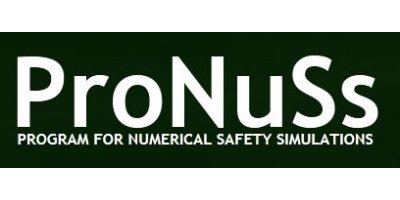 To make use of the program as simple and straightforward as possible, the analysis of accident impacts has been divided into individual modules for the determination of physical properties, calculation of mass flow rates, gas dispersion etc. The results of the individual calculations are then transferred to the subsequent modules. However, care has been taken to ensure that the individual steps are transparent and can be verified. This is achieved by outputting the complete calculation to a file and presenting the calculation results in graphical form. The functions provided by ProNuSs are described in a detailed user manual. The 'Program description' contains details of the models used, along with comparative calculations and information on applications and evaluation values.

A physical property database with over 60 substances is included in ProNuSs. Where available, AEGL and ERPG values have been compiled for toxic substances in addition to the other physical properties. If a probit function is to be used in the evaluation of the impacts of a substance release, the parameters for this function can also be entered along with critical explosion overpressures or irradiance values. These evaluation values can then easily be used in diagrams showing the calculation results.

An easy-to-understand editor has been developed so that users can create their own physical property data sets, which are saved in a separate database. For example, the vapour pressure curve can be described using data pairs, by entering the parameters of an interpolation function taken from the VDI Heat Atlas or by means of other functions. The physical properties of gas mixtures can be calculated from the pure substance properties by specifying the gas composition.

In process plants, gases are generally present under pressure. In the case of a fault with the containment equipment (leak, crack) or if the pressure relief system is activated, material may be released with considerable momentum in the form of a jet. An integral model is provided for the calculation of the concentration distribution in a jet. This model can be used when there is no wind, when there is lateral wind and in the case of a variable jet outlet angle. The additional elevation of the jet above the release location can subsequently be used in the calculation of the momentum-free gas dispersion.

If the outlet momentum has been dissipated or if momentum-free release is taking place, the concentration distribution in the surroundings can be calculated using the VDI Guideline 3783 Part 1 for neutral-density or light gases. If a heavy gas is released close to the ground, the gas dispersion is influenced to a significant extent by the buildings present. In this case, the concentration in the immediate vicinity is calculated using the VDI Guideline 3783 Part 2; this is then followed by a calculation using Part 1 in the case of toxic gases. Evaluation values or a probit function can be used to evaluate the results of these calculations.

If a flammable gas cloud is ignited by an ignition source with sufficient ignition energy, a flame front proceeds from the ignition source through the gas cloud. Expansion of the hot combustion products behind the flame front induces flow in the uncombusted mixture before the front and also leads to an increase in pressure. An explosion where the flame front speed is greater than the speed of sound of the mixture is referred to as a detonation, while a flame front speed below the speed of sound is termed a deflagration. A number of models are available to calculate maximum explosion overpressures. The well-established multi-energy model takes into account the type of ignition, confinement of the gas cloud by buildings and other structures, and the flame speed, which is in turn strongly influenced by turbulence in the gas cloud.

In the case of vessel failure as a result of excess pressure, the maximum explosion overpressure in the surroundings and the projectile ranges of vessel fragments have to be calculated. Two additional modules have been developed for this purpose

One of these modules calculates the gas-phase mass flow rate released to atmosphere through an opening (leak or safety valve) on a vessel or pipe under overpressure. Pressure drop calculations can be carried out here for the vent line upstream of a safety valve and the blow-off pipe downstream of a safety valve. Another module is provided for the calculation of the time-dependent mass flow rate for gas-phase release from a vessel.

Hydrostatic pressure or pump pressure can also be taken into account along with the vapour pressure of the liquid when calculating liquid mass flow rates. In the case of pressure-liquefied gases, the flash vaporisation fraction is calculated and the aerosol fraction is determined using a spray model. This determines the gas-phase and liquid-phase mass flow rates, which can then be used in the module for the calculation of pool evaporation, for example. An equilibrium model is provided for the calculation of two-phase flow from a leak.

A boundary layer method and a number of empirical equations are provided for the calculation of the mass flow rate of evaporation. The “Program description” contains details of the areas of application of the models along with recommendations for use. A significant factor that influences this calculation is the time development of the pool area, which can be calculated using models of varying complexity that are provided. The boundary layer method represents a very good approach for calculating the gas concentration above and close to a pool.

The cylindrical flame radiation model and the OSRAMO II model for soot-producing fires are provided for calculating the irradiance in the vicinity of a pool fire. Evaluation values or a probit function can be used to evaluate the results of these calculations, taking into account the speed at which persons can escape.

If a flammable gas is released under pressure – from a blow-off pipe, for example – and ignited, a jet flame will result. An established model is provided for the calculation of the irradiance in the vicinity; this model can take into account the influence of the wind as well as the outlet angle.

When flames impinge directly on a pressure vessel filled with pressure-liquefied gas, the strength of the walls of the vessel reduces with increasing temperature. At the same time, the pressure inside the vessel rises as a result of the heat input. It can be assumed on the basis of experimental investigations that an unprotected vessel wall will have been heated up to such an extent after around 30 minutes that it can no longer support the internal pressure and will fail by bursting. At this instant, the entire contents of the vessel are released, vaporise spontaneously and may then be ignited by the flame. A so-called BLEVE fireball (Boiling Liquid Expanding Vapour Explosion) results, which then rises and continues to burn. A number of models are provided for the calculation of the radiation heat transfer and the explosion overpressure.

A time-dependent calculation procedure has been developed in order to predict what effect fire insulation will have on the time interval necessary for a pressure vessel with a fire below it to burst. The vessel geometry, the properties of the insulation and the presence of a safety valve can all be taken into account here.

A fire results in thermal radiation and in toxic combustion gases. The concentration distribution of these gases in the surroundings can be calculated using the gas dispersion model. However, the basis for this calculation is an estimation of the composition of the combustion gases, which can be determined from the molecular formula in the case of incomplete combustion.

A quantitative risk analysis uses the frequency of occurrence of a given scenario and its impacts in order to predict risk. The frequency of occurrence of a scenario – as determined using literature sources, empirical models or the calculation of a fault tree – is entered in the QRA module. Impact analyses are carried out, taking into account the wind direction, wind speed and, in the case of the dispersion of heavy gases, the buildings in the vicinity. The calculation results are evaluated using limit values or probit functions. The risk can then be calculated and presented in the form of contour lines, taking into account the frequency distribution of wind directions and using an ignition frequency model for flammable gases.

Simple models that depend on the mass flow rate and a more complex model that takes into account explosion protection measures and the presence of buildings are available for the calculation of the ignition frequency. It is also possible to enter the population density in the area in order to determine the group risk.

No reviews were found for ProNuSs - Program. Be the first to review!