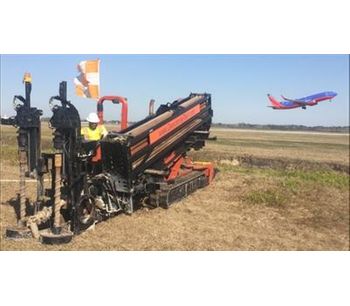 Introduction:
How do you remediate beneath an active airport taxiway without interfering with commercial airliners and United States Air Force cargo planes taxiing through your work area at 60 miles per hour? This was the problem facing the Department of Defense (DoD) at a site impacted with jet fuel.

To solve the problem, our long-time client, FPM Remediations, Inc., used their knowledge of horizontal biosparging wells to design a unique and efficient remediation system to allow for uninterrupted taxiing of commercial and military aircraft.

Background/Challenge:
Active remediation of jet fuel plumes at a joint international airport and Air Force base in the Southeast have been ongoing since 1992. A free product recovery system consisting of recovery trenches and vertical recovery wells successfully removed the majority of non-aqueous phase liquid (NAPL) from the subsurface. Residual contamination resulting in dissolved concentrations of jet fuel chemicals above the state regulator’s cleanup criteria were still present beneath the taxiway and aircraft parking areas. To address the remaining dissolved hydrocarbon concentrations, installation of an ozone/air sparge system was suggested with vertical sparging points; however, the proposed vertical system would unacceptably limit the use of the airport taxiway and aircraft parking areas. FPM Remediations, Inc. proposed an alternative plan horizontal biosparging wells to remediate the target area with minimal disturbance to site operations.

Site Geology:
The site is underlain by primarily fine to medium grained sands with some clay and silt. This fine sand overlies a dense grey-green clay present beginning approximately 17 feet below ground surface (bgs) derived from an estuary depositional environment. The majority of the residual contamination occurred within the saturated fine sands, above the clay layer.

Horizontal Bio-sparge Well System Design:
To effectively treat the target area, a total of three horizontal biosparging wells were installed into areas of historic free product occurrence. The horizontal wells were installed to depths slightly above the clay layer at approximately 17 feet bgs. The goal of the horizontal wells is to influence a lateral distance of 30 feet to 40 feet with oxygenated groundwater to stimulate bacterial growth in the subsurface for biodegradation of residual chemicals of concern.

The three horizontal wells are constructed with 180 feet to 320 feet of 3-inch diameter HDPE well screen designed with 0.010-inch longitudinal slotting at custom spacing. The customized slotting allows for air delivery rates of 0.1 cubic feet per minute (cfm) to 0.25 cfm per foot of screen. The remediation system is comprised of a trailer enclosed air compressor capable of at least 235 cfm at 24 pounds per square inch (psi).

To conduct work at the site, FPM performed months of coordination with the DoD and FAA prior to mobilization. Site access permits, worker security clearances, along with specialized worker training and certifications were required to access the aircraft taxiway and other secured areas.

Minimal Site Interruption:
While the environmental directional drilling was being performed, the taxiway was never shut down for the installation of the horizontal wells. Air traffic continued to move freely at the site, satisfying the requirements of the DoD.

No comments were found for Active Taxiway Remediation. Be the first to comment!