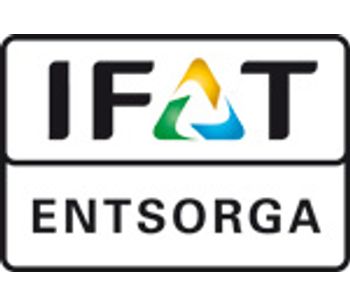 The World`s Leading Trade Fair For Water, Sewage, Waste and Raw Materials Management - IFAT ENTSORGA 2012 - is innovative, because it focusses on new product groups, comprehensive, because it covers the water, sewage, refuse and recycling sectors in their entirety international, with visitors and exhibitors from around the world informative, with a related events programme that creates synergy.

Following its amalgamation with ENTSORGA, IFAT has celebrated a successful premiere and established itself firmly as the world’s leading trade fair for environmental technology. This is seen on the one hand in strong interest from visitors from abroad, their proportion rising from 33 percent of the total at the last IFAT to 40 percent this year. And on the other hand in a broadening of the international spread among the exhibitors, with 37 percent of the total coming from outside Germany this year, as compared to 32 percent last time.

Dr Johannes F. Kirchhoff, Chairman of the Advisory Board of IFAT ENTSORGA and Managing Partner of FAUN Umwelttechnik: 'IFAT ENTSORGA has more than done justice to its new role as the World's Leading Trade Fair for Water, Sewage, Waste and Raw Materials Management. What was particularly noticeable was the high numbers of international visitors.' Peter Kurth, President of the Bundesverband der Deutschen Entsorgungs-, Wasser- und Rohstoffwirtschaft e.V. (BDE – Federation of the German Waste, Water and Raw Materials Management Industry) added: 'The waste, water and recycling sector has welcomed the extended concept of the fair. We were particularly pleased with the strong international interest.'

Over the five days of IFAT ENTSORGA, around 110,000 trade visitors from over 185 countries came to the event. After Germany, the top ten countries of origin for visitors were, in order: Austria, Italy, Switzerland, Spain, Poland, the Czech Republic, Denmark, the Russian Federation, the Netherlands and France.

Take advantage of this opportunity to present your company, your products and your services to the international market by exhibiting at the fair. It is the best place to encounter strong interest and concrete demand from some 110,000 visitors. Use IFAT ENTSORGA to cultivate ties to your customers and make new contacts. Profit from good long-term business prospects at IFAT ENTSORGA.

A Strong Range of Exhibits

Following its amalgamation with ENTSORGA, IFAT has celebrated a successful premiere and established itself firmly as the world’s leading trade fair for environmental technology. In total, 2,730 exhibitors from 49 countries presented their products, innovations and services on around 200,000 square metres of exhibition space. Never before have so many exhibitors from so many different countries been represented at IFAT ENTSORGA.

A Programme for Your Successful Trade Fair Participation

IFAT ENTSORGA 2012 supports you with the “Your key to trade fair success” programme in order for you to fully take advantage of your trade fair participation.

The “Your key to trade fair success” programme supports you with extensive trade fair “know how” by offering an online training course, a handbook for your trade fair planning as well as examples and checklists. Furthermore, this package of measures offers you practical support such as helpful tools and services as well as information on how to implement the important steps into your trade fair preparation, realisation and follow-up.

We are offering the majority of services as free of charge to you as an exhibitor of IFAT ENTSORGA 2012.

IFAT ENTSORGA revolves around state-of-the-art know-how—just one of the reasons it is so popular among visitors. As a result, it offers you a number of opportunities to network at the international level. Whether it comes to comparing specific interests, discovering new contacts or establishing promising business ties: this is the place to discuss everything with everyone.

Thanks to its unique programme of supporting events, IFAT ENTSORGA is a trade fair of opinions, findings, experiences and visions. The forums are platforms for company presentations, panel discussions, country specials, technical discussions and special events. Trade associations and manufacturers will hold practice-oriented live demonstrations of machines and systems at the open-air site.

The thing that makes the events programme so impressive is the extraordinarily wide range of topics that it covers. Thanks to experienced professionals, key domestic and international trade associations, government agencies and ministries, IFAT ENTSORGA will be an international industry event again in 2012. This trade fair is like no other event of its kind because it opens up new perspectives and points of view that are groundbreaking for trade-fair participants and market players alike.

No comments were found for IFAT ENTSORGA 2012 - Trade Fair for Water, Sewage, Waste and Raw Materials Management. Be the first to comment!

Want to participate in this event?