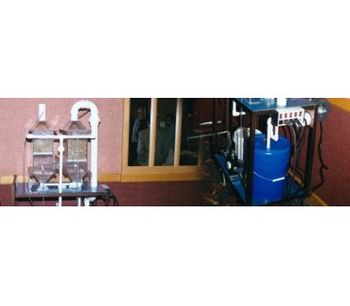 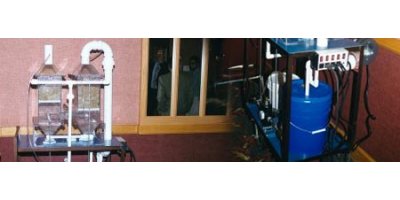 Limiting hazardous air pollutants (HAPs) emission from industrial operations and waste treatment facilities became a national priority in 1990 with passage of the Clean Air Act amendments. The trend towards stricter air emissions regulation is spreading throughout the world, leading to developments such as biofiltration for effective air treatment. Biotrickling filters are a recent addition to the list of alternatives. These filters use synthetic materials, rather than organic, with active bacteria immobilized on the surface as biofilms.

Biological treatment or biodegradation involves converting an organic contaminant to carbon dioxide and water using natural bacteria. Bacterial cultures are microorganisms that typically consist of several species coexisting in a colony. These bacteria are found in soil, peat, compost and natural water bodies including ponds, lakes, rivers and oceans. They are environmentally friendly and non-harmful to humans unless ingested.

The organic(s) are air contaminants, the oxygen is in air, the nutrients are nitrogen and phosphorus mineral salts needed for microbial growth and the microorganisms are live bacteria on the biofilter media. Biodegradation of organic contaminants results in microbial growth, carbon dioxide and water.

Biodegradation has been used for years to treat wastewater while biofiltration emerged within the past decade as an economically viable process. Initially, biofiltration involved using naturally bioactive media such as soil, peat or compost. In this media, microorganisms biodegrade contaminants, such as when bioremediation is used on contaminated sites.

Synthetic support media include high surface area pellets with either a porous or non-porous surface. The support media may be coated with activated carbon to enhance contaminant adsorption.

The support media has been tested at the pilot scale for treating odorous emissions from a sludge thermal conditioning (Zimpro) process at the Sanitation District No. 1 wastewater treatment plant in Northern Kentucky. It has also been used to treat ethanol emissions from a bakery stack at the Wonderbread Bakery, Interstate Brands Corp., in Columbus, Ohio.

In both tests, the biofilters removed more than 99% of odorous emissions and more than 95% of ethanol emissions.

The future of biofiltration depends on regulatory requirements placed on industry. Some trends that will impact the market for biofiltration technology include:

Biofiltration technology application has increased during the end of the 20th century and could continue to grow throughout the 21st century. Although recent studies vary, the U.S. biofiltration market for 1996 is estimated at $10 million. Economic models speculate that by 2000, the market may top $100 million.

Potential markets for biofiltration include treating odors, volatile organic compounds, hazardous air pollutants and petroleum hydrocarbons. Odor treatment could be the largest market in wastewater treatment are that includes industries such as tobacco, composting and sludge treatment, foundries and pulp and paper production.

Communities have begun to expand development toward wastewater treatment plants, which are treating increased waste flows. Flows are pumped from greater distances than in the past so wastewater takes longer to get to the plant. The waste becomes more septic and produces more reduced nitrogen and sulfur compounds.

Wood products, pulp and paper, and surface coating operations create volatile organic compounds and hazardous air pollutants. In surface coating operations, worker exposure to organic chemicals such as styrene is a concern. Some worker exposure is inevitable but biofiltration systems on the shop floor can reduce concentrations of organics in the air.

Refining and transfer operations release petroleum hydrocarbons composed of aliphatic and aromatic compounds, which are biodegradable in biofilters. Some leaking underground storage tanks pose another environmental hazard. The hydrocarbon contaminant released through a leak can be separated from soil and/or ground water by using air sparging, bioventing or vapor extraction. The volatile hydrocarbons are transferred into the air phase where they can be treated with biofiltration.

As biofiltration knowledge increases and more pilot studies are conducted, the biofiltration market is expected to increase. More industries are learning the potential advantages of biofiltration, which include:

Biofiltration could play a major role in treating organic and inorganic emissions from a variety of industrial and wastewater treatment processes. Compared to other available technologies, biofiltration has technical and cost advantages. The market for biofilters could increase in the next millennium as new applications arise.

No reviews were found for Advanced VOC Control Technology. Be the first to review!