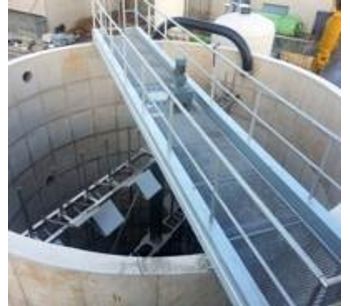 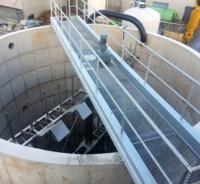 Application: In order to remove phosphates from waste waters or digestate in an environmentally friendly manner the ANPHOS® process can be applied. During anaerobic waste water purification the phosphate present is largely converted into ortho-phosphate, whereas the nitrogen is converted into ammonia (NH4-N). In case of aerobic pre-purification orthophosphate is formed as well with potassium as counter-ion.

The basic principle of the ANPHOS® process is the aeration of waste water, which induces a positive pH shift. As a result of the addition of magnesium(hydr)oxide the ortho-phosphate reacts with ammonia and magnesium ions to form magnesium-ammonium-phosphate (MgAP) or magnesium-potassium-phosphate (MgKP) also known as 'struvite'.

After the reaction the struvite is precipitated, dewatered and dried. This product can directly be applied as substitute for agricultural fertilizers. In this manner the phosphate cycle is closed (cradle-to-cradle or C2C).

More about Phosphate Recovery from Wastewater

During anaerobic (pre-) treatment of waste water about 85% of the phosphate is converted into ortho-phosphate. In the case of aerobic waste water (pre-)treatment this conversion level is >95%. The ANPHOS process is subsequently capable of removing ortho-phosphate to levels of <5mg/L(< 10 -15 mg/L Ptot).

Per every kg ortho-phosphate removed, an amount of 0,45 kg ammonium nitrogen as well as 1,3 kg of magnesium is captured to generate 7,9 kg struvite. In addition the AHPHOS process simultaneously removes up to 50% of the residual organics (COD).

In contrast with traditional approaches in (chemical) phosphate removal, the exploitation costs for the ANPHOS process are balanced. On one hand magnesium(hydr)oxide is purchased and aeration energy is needed (to raise the pH), but on the other hand a marketable product 'struvite' is formed.

The revenues of the ANPHOS process consist of the commercialisation of the 'struvite' and a significant reduction of the operational costs. For conventional chemical dephosphatisation, flocculation agents are needed (e.g. FeCI3, FeS04 or AICI3). In addition to this cost, COD and ammonium removal require additional amounts of aeration energy. At the same time significant amounts of sludge are produced, resulting in extra costs for sludge discharge.