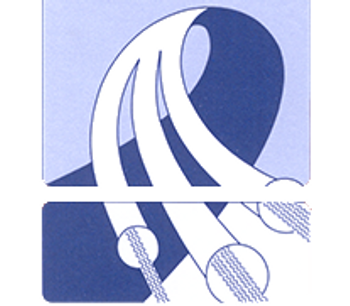 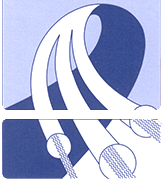 The basis principle of this waste water treatment method consists of an aerobe treatment sometime in combination with an anaerobe treatment. The air coming from the procestanks is desinfected by our own air-desinfection units. The anaerobe step is being to decrease the Nitrogen-level. The aerobe steps are as follows; A reactor (B), where aërobe organisms are present which consume nutrients which are present in the water by using oxygen (Q) which is being injected. To inject oxygen and to keep organisms in place the water-puffer is being aerated and circulated. Nutrients (reed pollution) are being hacked into smaller peaces (extracellular reaction using enzymes which are produced by the micro-organisms). These smaller peaces are being consumed and oxidated inside the organisms cell-structure using lots of oxygen to breath.

After staying in the reactor, waste water is being lead into a separator, where the flow is being reduced. Micro-organism and sludge are being held back by gravitational separation. The treated waste water (QA) is being ejected, sludge and organisms are being transported back to the reactor (QRS) or removed from the system(QÜ).

The carriers with cleaning-ability are inside the active sludge. This sludge contains numerous smaller particles with a diameter mostly between 50 & 200 µm. The center from this particle contains inactive material coming from the waste water like (1) aluminium-, iron-, and sillicium oxyde, (which gives a slight brown colour), (2) metals, (3) hydroxydes and (4) chalk. In the biological active water-sludge boarder the bacteria can be recognized by its grey colour. The content of the biological boarder-area is changing all the time. This happens because of the changing pollution in the waste water and because of the dynamics of the particle it self which cause is unknown.

Bacteria mostly live in a humit environment. Most of the time bacteria feed themselves on organic materials. They take care that these organic building blocks are being led back into the natural reactions of metabolism.

The degradation of pollution based upon metabolite processes happens in a number of phases. A simple small pollution-molecule solves in fluid. After that it will be absorbed by the bacteria and pass the cel membrane to be included in the metabolite-process. Here enzymes take care of the degradation to carbon dioxyde and water, except the materials which the bacteria use as building-materials or energy for the metobolite processes. With bigger complex molecules this is not possible, these bigger molecules can't pass through the cell-membrane. Therefore the bacteria secrete extra-cellular enzymes which work as small scissors which cut the bigger peaces in small peaces which can pass the cell-membrane. Water and carbon dioxyde are secreted by the bacteria.

For the aerobe metabolism oxygen is used. This oxygen is solved in the water by mechanical air-pumps. Next to oxygen other chemicals, in smaller concentration, influence the metabolite process.

Important are a number of elements solved in the water, which can be added to the waste water. Sulphur, potassium etc. have an important roll. In exception of Nitrogen and oxygen all necessary chemicals are present in waste water coming from car wash, truck wash, food-industry. The addition of oxygen is allways necessary Nitrogen can be added in the first stage of starting up a plant.

Enzymes are organic and therefore pH influences the reaction-speed. Some enzymes can be active in a very wide pH-range. Mostly the right pH ranges between 6,5 < pH < 7,5. By secreting carbon dioxyde the pH of acid-like waste water is strongly neutralised. Temperature has a double influence on the reaction-speed in biological processes. At first increasing temperature will lead to a faster chemical or biological reaction The increase of reaction-speed is limited because enzymes degradate at high temperatures.

Depending on the bigger pollution-molecules different enzymes are necessary to be able to degredate pollution.

Waste water technologies Afvalwatertechniek uses this biological system to clean waste water from car-truck-train- and plain-wash-equipment to use this water a second third ... time. Also the VOS/FAT, Aqua Spa Bio/BIO-FLOW use this technology.

The reactor is created by a water-puffer which is being aerated by an aeration-turbine which also circulates the waste water, this puffer therefore is called the Bio-Reactor, actually the biological processes are happening in the complete system.

Proces-tanks (mostly underground) take care of sludge-separation (seperator C). Because of the time needed for separation as well as degradation-speed a bigger volume is needed ranging from 10 - 100 m&sub3

No reviews were found for Biological Wastewater Treatment System. Be the first to review!