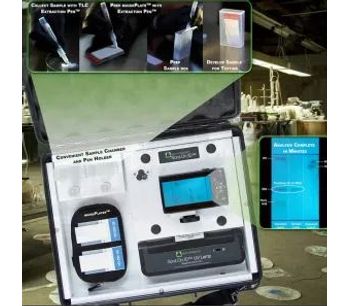 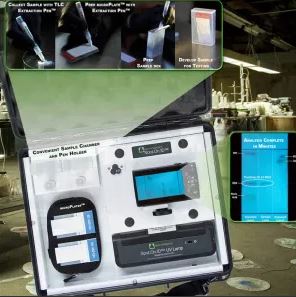 Developed from FFI’s microTLC™, winner of the R&D100 Award for 2014, Spot.On.ID™ analyzes forensic and environmental samples to detect and identify explosives, illicit drugs, insecticides, pesticides and other targets in samples taken from surfaces, liquids and solids – in the laboratory and in the field.  Spot.On.ID™’s simple disposable tests have greater analytical power than colorimetric tests and the samples are non-destructive, allowing additional lab analysis of field samples.

Spot.On.ID™ uses thin layer chromatography (TLC) to give users a simple and effective way to separate and identify substances that cannot be differentiated with colorimetric test kits. In the above example, RDX and PETN can easily be differentiated and identified in the sample.  The method works at trace levels as well as with bulk samples – explosives and narcotics.

Spot-On™ brings new capability to field identification of explosives, just like it does for narcotics. Colorimetric tests for explosives have been in use for years and have proven cost effective for rapid detection and identification of explosives; we offer ELITE™, IDEX™, ULTRA™ and the automated system ELITE.Guard™. However, our kits, like those of all other manufacturers (no matter what they might tell you) cannot differentiate explosives and propellants in the aliphatic group – compounds such as RDX (C4), HMX, nitroglycerine, PETN, and nitrocellulose (smokeless powder); Spot-On™ differentiates explosives in this group.

Color tests kits can’t tell the user whether it was PETN, RDX, nitroglycerin, etc. but Spot-On™ can differentiate many explosives with just one sample, even at trace or near trace amounts.

Spot-On™ rapidly identifies the nitrocellulose in gun shot residue or can verify ammonium nitrate with a different test from the same sample.

Spot-On™ identifies drugs with much more discriminating power than color test kits at a similar low-cost per sample. Unlike color test kits, Spot-On™ creates a test that can be used as evidence and also later analyzed in the lab. So, the Spot-On™ presumptive test not only gives the officer a quick answer in the field, the test itself can later be analyzed in the lab to verify the result. Color test kits are destructive so there’s no way to analyze the test kit itself if it were taken back to the lab – not so with Spot-On™.

No reviews were found for FFI - Model Spot.On.ID - Explosives and Narcotics Detection Analyzer. Be the first to review!