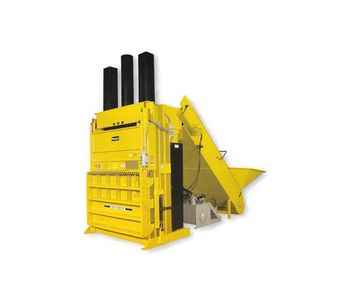 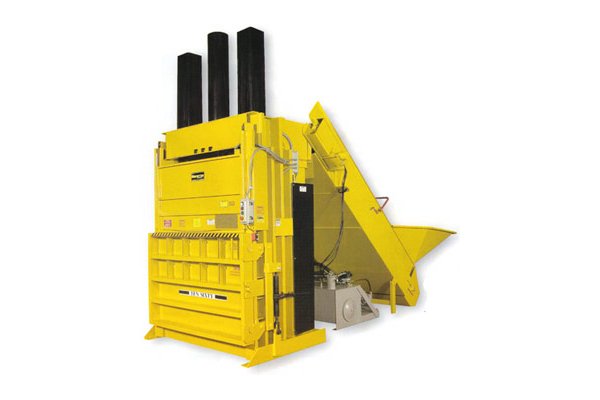 The System Ten Sixty Automatic Baler can be configured as a unique rear feed auto cycle baler for use in very high capacity situations, when space is at a premium.

Using the rear feed system, steel and aluminum cans, plastic bottles, and newsprint are simply dumped into the conveyor hopper.  The T60XDRC can also be used as a textile baler or clothing baler.  The recyclable material is then conveyed into the baler and automatically compacted into extremely dense bales. When the desired bale height is reached, the baler shuts down and signals the operator to tie off and eject the bale.

A computer-engineered frame that withstands 235,620 pounds of force

The System Ten Sixty is a versatile automatic baler that produces big results. It features a 10 inch bore hydraulic cylinder with twin torque tubes. Extra heavy duty construction extends to every aspect of the machine including the dual hydraulic ejectors, which smoothly eject bales of OCC weighing up to 1500 pounds. The hydraulically operated variable speed conveyor is controlled by the baler and is designed to maximize productivity.

As a recycling center baler, textile baler, clothing baler, and in other situations that require high capacity and volume, the System Ten Sixty becomes a money maker.

Read this great post about how an automatic baler can improve operations.

The market value of the bales produced by the System Ten Sixty are high since they can be shipped to the end user without additional processing, Shipping costs are reduced because maximum truck loads can be achieved. Material handling, labor, and storage costs are minimized.

There is no longer a need for high cost, space wasting horizontal balers.

The System Ten Sixty has eliminated the need to buy into high cost, bulky, and space wasting horizontal balers. This automatic baling system from Harmony Enterprises changes things for the better.

(bale weights are approximate & may differ depending on moisture, material type or density and caps on PET bottles)

No reviews were found for Harmony - Model T60XDRC - Automatic Vertical Baler. Be the first to review!