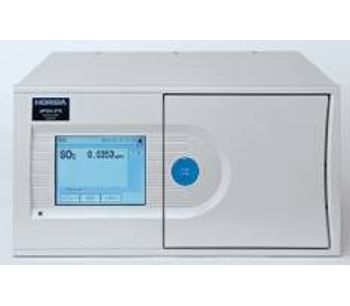 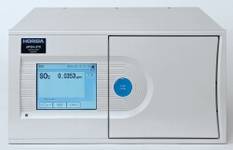 The APSA-370 is a device for the continuous monitoring of atmospheric SO2 using UV fluorescence. The APSA-370 employs an proprietary, internal dry-method sampling device to achieve the highest levels of sensitivity and accuracy. The dry-method, due to its minimal maintenance requirements capability of continuous monitoring and instantaneous analysis of gas in its unaltered state, has been a preferred method for monitoring the atmospheric pollution.

The UV fluorescence method operates on the principle that when the SO2 molecules contained in the sample gas are excited by ultraviolet radiation they emit a characteristic fluorescence in the range of 220-420 nm. This fluorescence is measured and the SO2 concentration is obtained from changes in the intensity of the fluorescence. The reactive mechanism is

Here, (1) shows the excited state of the SO2 molecules that have absorbed the amount of energy hv1 by ultraviolet radiation. (2) shows the amount of energy, hi/2 emitted by the excited molecules as they return to the ground state. (3) shows the decomposition by the light emitted from the excited molecules. (4) shows the quenching, i.e., the energy lost by the excited molecules colliding with other molecules. The APSA-370 uses an Xe lamp as the light source, and the fluorescent chamber design| minimizes scattered light. The optical system has been carefully designed with low background light, making it possible to take measurements with a highly stable zero point. In addition, a reference detector monitors any fluctuation in the intensity of the light source. This allows the unit to calibrate itself automatically for sensitivity, resulting in greater span stability.

No reviews were found for HORIBA - Model APSA-370 - Ambient Sulfur Dioxide Monitor. Be the first to review!