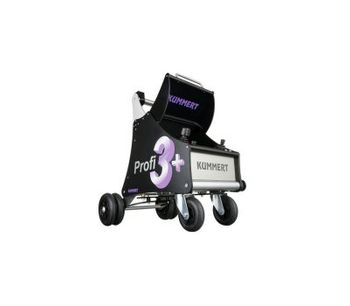 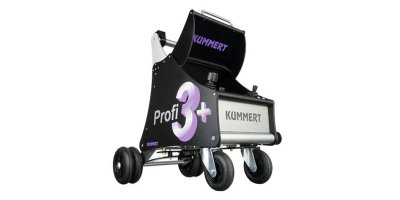 Profi 3+ is the ideal equipment for any kind of inspection task from a quick snapshot to a georeferenced 3D project. Due to its compatibility with all Kummert crawlers and the entire range of push cameras, pipes with diameters from 40 mm up to 800 mm can be inspected.

Profi 3+ features several standards and export interfaces. For each individual project, the inspector can decide which standard to use, if damage categories are generated and if video texts shall be edited subsequently.

Plan masters in all common formats, as well as georeferenced files form the basis for the 3D sewerage system to be created. Drawing functions allow the operator to sketch 3D buildings manually and add details like doors, windows or stairs.

Manholes and drainage objects mark the beginning and end of pipes and sewer sections. Their position on the map can either be determined manually or measured. The inspector enters the manhole’s shape, dimensions as well as the number and position of connections. Thus an exact model is created which contributes to generating a realistic map of the sewerage system. In addition manholes can be inspected and according reports be generated.

Of course the survey of pipes and sewer sections is done in accordance with the selected inspection standard. The software requests all needed information and offers a list of feasible findings. Along with its condition, the pipe run is detected and immediately displayed as a three-dimensional model.

All entries can be deleted, edited or completed while or after the inspection as well as the automatically generated pipe run. The map of the sewerage system does not only provide orientation but is also a useful base for planning rehabilitation measures.

The modular setup of Profi 3+ enables the inspector to change over reels, cable drums, cameras and crawlers without any effort. Moreover the devices are even easier to transport as single components. The arrangement of monitor and control elements allows the inspector a comfortable, seated working position. Accessories like the elevation platform or chair with additional storage space even improve this comfort.

In comparison to analog, the digital transmission features remarkable advantages - sharper images and higher resolution. Especially still images generated from a video file are definitely clearer and sharper. This is realized by different recording methods. With the interlace procedure, half images are recorded and assembled afterwards which results in effects like blurring and artefacts. With Progressive recording on the other hand full images are captured which prevents any loss of quality.

The Profi 3+ can be connected to the internet via WLAN or an integrated LTE-module*. Internet access allows for entirely new possibilities and will ease and accelerate procedures and workflows.

If required, service and support staff can log on to Profi 3+ and thus react quickly and more efficiently to questions and operational issues. In order to keep the software up to date and take advantage of all new features, updates can now be downloaded and installed directly to Profi 3+.

Depending on the selected video quality, subsequent text overlay can be selected for status texts entered during inspection. These texts will be inscribed in the video during the final export in the office. Prior to the export, all data remain editable.

The built-in battery energizes Profi 3+ up to three hours and is fully recharged after only two hours and ready for its next use.

No reviews were found for Kummert - Model CamMobile Profi 3 + - Push Cameras. Be the first to review!