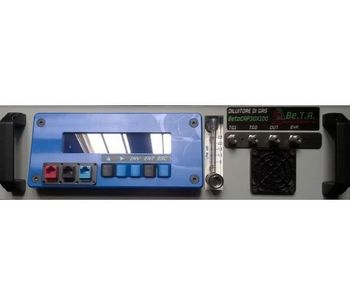 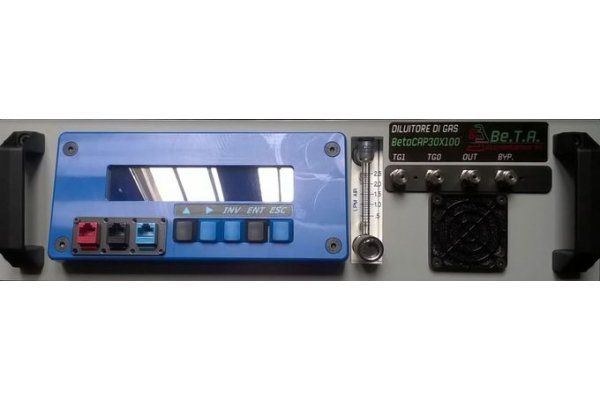 BetaCAP30X100 is a gas divider in two stages with 100 + 30 equal capillaries, designed to operate 31 dilution ratios linearly scaled between 0 and 100%) and 30 more between 3.000: 1 and 100: 1. While the first range of dilutions gets the main application of the analyzers for emissions, the second is aimed to tests of analyzers air quality (immission).

The pre-diluter is controlled by a separate electronics, but his functions are coordinated by the main interface (display / keypad) so that the operator does not have to worry about the interfacing of the two modules.

From the diagram it is evident an apparent inconsi...

From the diagram it is evident an apparent inconsistency: while the flow of gas leaving the pre-diluter is constant, the required flow (gas to be diluted) to the final diluter is variable (due to changes of the dilution factor) with a dynamic range of 0 to 30. The the bypass valve (CVby) has precisely the function of adapting the two stages venting, when necessary, the excess gas pre-diluted. Activating the solenoid valve SV07 the pre-diluter, is bypassed and the span gas is applied directly to final diluter. In this case, the bypass regulator is automatically set to off.

Continuous dilution range with capillaries ? Yes, we can and we do it.

For nobody to be nostalgic for MFC systems, BetaCA...

For nobody to be nostalgic for MFC systems, BetaCAP30X100 can also be managed in the range of dilutions between 0.5: 3000 and 29.5: 30 (almost 5 decades!) setting the “target” concentration value: the diluter know whether or not to activate the pre-diluter, how to distribute the capillaries between the two gas supplies (diluting and diluting) and which pressures to apply to obtain the target concentration in compliance with the flow set by the User.

The above graph shows in abscissa the dilution ratio and in ordinate for the blue trace the pressures ratio (gas to be diluted P1 / diluting gas P0) and for the brown trace an indication not in scale of the discrete steps of the diluter ( 30 steps). For readability reasons, the detail of the dilutions between zero and 1: 100 has not been represented, which, having expanded 100 times, would have had the same representation.

Also for BetaCAP30X100 the “All steel” option is available, where the fluorinated resins used normally for the elements in touch with the gases (PVDF) are replaced by AISI 316L steel. While the degree of resistance to corrosion does not change significantly, the choice of steel is advisable for measuring O2 in ppm, because the porosity of plastic materials does not prevent air oxygen from permeating in low concentration areas. Another possible reason for choosing “All Steel” is related to safety: toxic and / or flammable gases are managed with greater safety in pipes and steel components.

No reviews were found for Model BetaCAP30X100 - Gas Diluter With Two Diluting Range. Be the first to review!