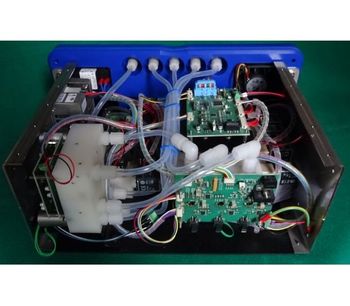 BetaCAP60X100 a compact diluter with 3 inputs (two gases to be diluted in a diluting gas), pre-dilution just for an input and flow comparator for self-checking with relative deviations calculation. BetaCAP60X100 is built complying with the principles that inspire the entire Be.T.A. production : equal capillaries, electronic pressures control and manifold construction in highly corrosion-resistant materials. Very similar to the BetaCAP60-3G model, is distinguished only by the addition of a module pre-divider by 100, inserted in series at the TG1 gas inlet (measurand).

Both inputs (TG1 and TG2) can be diluted in the range 0 … 100% in 60 steps. The TG1 input can be diluted over a further 60 steps in the range 6000 : 1 … 100 : 1. While the 0 … 100% range is designed for emissions analyzers, the higher dilutions allows testing analyzers used for Air quality monitoring networks in ppb using cylinders containing several hundred ppm.

As for the rest of the Be.T.A. production, the “continuous” mode is available, which will leave no regrets for users accustomed to using MFC systems, who will enjoy much higher stability in short, medium and long term.

BetaCAP60X100 enters in direct competition with MFC systems which, before its recent arrival, almost dominated the world of tests on air quality analyzers.

It also benefits from numerous advantages :

The three modules that make up BetaCAP60X100 have been highlighted:

BetaCAP60X100 has a particularly luky combination of features regarding the groupings of installed capillaries:

A function is available (created for local execution and for PC-managed execution) that uses the CAP60 module described above to perform a series of programmed comparisons, from which the flow deviations of each group are calculated with respect to the correct proportions. The operation takes its validity from the consideration that the dilution ratio is a pure number (not a quantity) and that its value does not change by multiplying by the same constant the value of the two flows (diluting gas flow and diluted total flow) which in the ratio they define it.