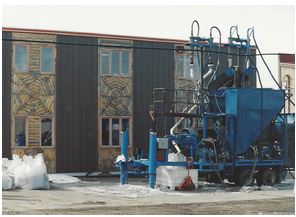 The TW75 was developed from work done by Larry Wood during the Exxon Valdez oil spill at the request of the Alaska Deptarment of Environmental Conservation for a mechanical 'rock washer' that would clean the oil contaminated beaches of Prince William Sound. The design was updated for the burgeoning industry to cleanup leaking under ground storage tanks and a prototype produced by Magnum Resources International, Inc., TRL's predecessor, for L&C services of Anchorage, Alaska.

In 1991, the TW 75 prototype was tested under the auspices of L&C Services, Inc. There were several significant benchmarks established. One was the successful materials handling test involving bentonite drilling mud contaminated with diesel and crude oil accomplished at the request of BP Exploration, Inc. in June-July 1991. Another was the first winter operations with a soil washer. Another benchmark was the ability of the unit to process -200 fine soils. The TW75 successfully completed the test series for UNOCAL, BP, worked two jobs, one of which was in the dead of winter.

The Kenai Fish & Wildlife aviation fuel clean-up was the first soil washing project undertaken in the dead of winter. The job location was Kenai, Alaska with ambient temperatures of between +15F (-9.4C) and +25F (-3.9C). Wind chill factors reduced the ambient temperature for the human operators to -20F (-28.9C). This was the first job accomplished on behalf of a federal agency: Fish & Wildlife Service. 270CYDS of soils contaminated with avgas were processed. Again, this was a project with a high fines content.

The post treatment results were non-detect ( ), meaning the soils were cleaned to a point of there being no detectable hydrocarbons remaining in the soils. The Request for Disposal (RFD) for this project was approved. The applicable RFD is UST Project Spill No. 90-23-00-268-03.

No reviews were found for Terra - Model TW75 P - Soil Washing Units (SWU). Be the first to review!