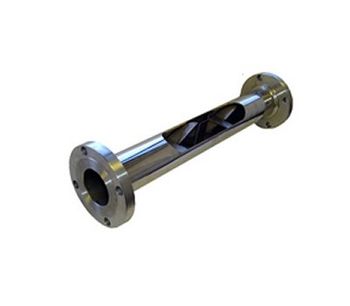 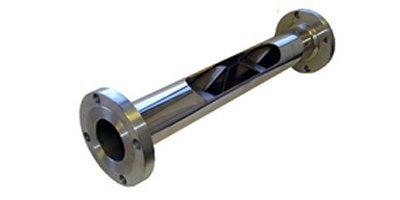 The Komax Triple Action Mixer provides the highest level of mixing of any static mixer. These “In Stock” mixers feature very high mixing efficiency with short mixing length. The Komax motionless mixer achieves high efficiency through triple action mixing. They are designed for use where additives to the main pipeline flow have already been introduced upstream of the mixer.

Materials of construction are carbon steel, 316 stainless steel, PVC and fiberglass. Mixers are listed on the “M” Series and “A” series pages.

A unique flow straightener is built right into each mixer to eliminate any downstream centrifugal effects. This allows sensing probes to be located directly downstream of the unit. The additive port on the “A” series mixers may be used for a threaded connection to a male pipe thread, or converted to a flanged connection using a nipple and a threaded flange.

Custom configurations of these mixers are available and include multiple ports, different end fittings including grooved and plain ends, and different style mixing elements. Contact Komax for your custom quote!

Advantages Of The Triple Action Mixer

KOMAX mixers divide and re-divide the process stream with a series of elements set at right angles to each other. Each element doubles the number of previous divisions. Twenty elements produce over a million divisions and re-combinations.

Special cavities randomize the distribution of material by DIRECT STREAM IMPINGEMENT. This enhances and optimizes the two-by-two division process to make it truly effective.

Under turbulent flow, both sides of each KOMAX element produce elliptical vortices rotating in opposite directions. This eliminates the streaming or tunneling effects associated with early static mixer designs. In addition, an optimum degree of BACK-MIXING occurs as material is orbited in the vortex from the front to the back of an element before continuing downstream. This produces a substantial improvement in mixing efficiency.

No reviews were found for Triple Action Static Mixer. Be the first to review!