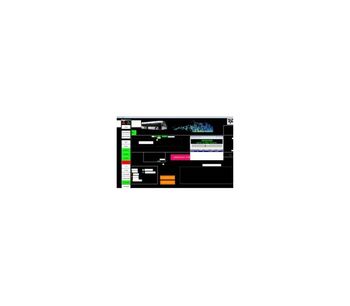 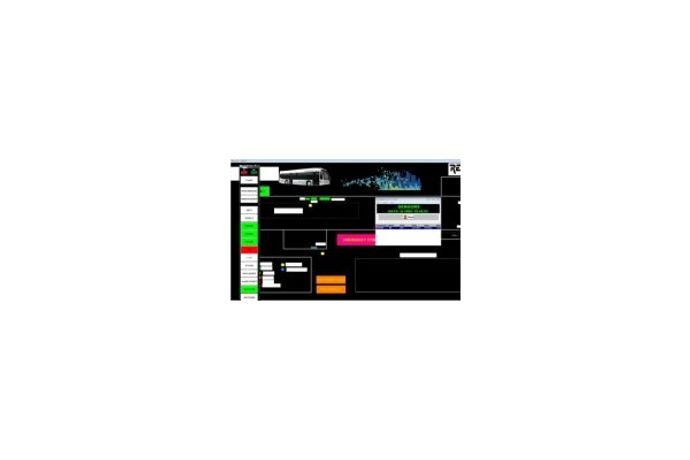 Millennia-DX - Monitoring and Control System for Windows Based Software

Parameters: PC/Windows based software, computer, communication drivers and intelligent field I/O cards; 20-mile range hardwired, or unlimited with modem. Millennia-DX (Version FT) is an enhanced version of the already powerful and easy-to-use EZ-Trol/DX real-time monitoring and control software. Version FT is a true (native) 64-bit application running on a Pentium PC under Windows 7 Pro and including Linux taking advantage of powerful 64-bit features and utilities within the latest Windows and Linux platforms. The Linux system that Millennia-DX has been run and tested on are the latest PCLinuxOS and others.

Recently, Millennia-DX was enhanced and modified to include a new feature that mining industry can take advantage of. It is called Blast Timer. With Blast Timer, Millennia-DX Alarm can be momentarily changed for certain amount of time as set by the user while blasting a mine.

The uniquely integrated software and hardware package provides a fast, capable monitoring and control system - specially engineered for high reliability and ease of use. Millennia-DX is written as one distinct program and eliminates the slow and often unreliable DDE links most competitors use for inter-module message transfer.

A. Overview-- The new Millennia-DX (Version FT) system runs much faster, with greater ease of setup, more visibility of status for the operator, enhanced security and with more powerful graphics and user interface features. The Millennia-DX software is backward-compatible with previous EZ-Trol/DX versions, permitting setup and configuration files to be imported without modification. Upgrading is automatic, adopting all previous setup files. However, this new FT version requires Windows 98, 2000 or XP and will not operate on Windows-3.1. or 95.

This defines the field I/O card types, addresses, I/O channel designations, data ranges, units and the like. Enhanced menu options includes a feature to quickly enable or disable all units (addressees) or selected ranges, rather than one at a time. A right click brings a simpler card type selection; just pick from a list.

Setup has been simplified and more logically organized for defined access. Any menu function can be protected, using hierarchical passwords.

This is the utility within Millennia-DX software that allows the user to mainuplate sensor reading or value based on mathematical expression.

This is the utility where individual channels (analog or digital inputs or outputs) are identified and assigned to field I/O card addresses. A right click brings a menu of all available I/O card, showing all available channels, A left click assigns the sensor to a selected channel. Add any number of sensors using powerful Find/Replace and Copy/Paste utilities, with new sensors retaining all the same attributes as the sensor model used. A signal check utility shows if a signal is being used by the system before permitting modifications or deletions.

This screen shows the current status of all outstanding alarm and control functions. A quick glance reveals the outstanding - un-acknowledged - alarms. The status screen has been reorganized for more concise visual information, usually without scrolling. Greater flexibility was added for customizing and prioritizing alarm events by color.

Threshold of value changes for logging is now easily modified by a simple global command, or by selecting groups of sensors. Local overrides are always possible. Logging groups and signal lists are now sorted for easier access. The Data Viewer utility has been seriously modified for easier setup and more precise viewing. Grids and units title/names for each color are displayed, in addition to the standard day/week/month time base selection as before. Printout is also easier, and graphs have a distinctively professional format.

This screen lets you setup PID Loop and sets its parameter. What is PID Loop? It is a control loop feedback mechanism widely used in industrial control systems and a variety of other applications requiring continuously modulated control. A PID controller continuously calculates an error value as the difference between a desired setpoint (SP) and a measured process variable (PV) and applies a correction based on proportional, integral, and derivative terms (denoted P, I, and D respectively) which give the controller its name.

In practical terms it automatically applies accurate and responsive correction to a control function. An everyday example is the cruise control on a road vehicle; where external influences such as gradients would cause speed changes, and the driver has the ability to alter the desired set speed. The PID algorithm restores the actual speed to the desired speed in the optimum way, without delay or overshoot, by controlling the power output of the vehicle's engine.

A number of new commands were added providing better access to the Windows screen and file controls. Script library was expanded to include custom control strategies using intuitive, symbolic code.

This unique and powerful utility depicts boolean control logic visually, using a menu of inputs and outputs with and/or gates, pulsers and timers in a schematic format showing 'virtual' connections and logic flow strategies. Color changes show active control paths for easily identifying the source and results for each control action.

Audio functions were added, providing wave file selections of bells, whistles, horns and even stored voice messages as output options. Script control for time on, time off, time delays, etc. were also added for invoking Windows commands as a basis for control actions and alarms. Grid size was cut in half to permit doubling the number of control lines per page, and with more command logic space per line. Speed of control scanning has been increased many fold, allowing even large systems to operate with fractional second timing.

It gives the user the ability to disable Millennia-DX software's Alarm feature momentarily, when a mine is begin blasted. So, the Millennia-DX System won't go into Alarm state in the event gas is released as a result of the blast.

These utilities have been enhanced to add new capabilities, as well as to permit easier, more powerful setup and usage. New icons: Polyline and Polygon tools, permitting irregular, closed, straight line symbols having selectable fills and color options. A dynamic cursor feedback provides clear identification of selected elements and groups; flags show command names for easy reference. The icons can be grouped for dynamic display and control, as well as exporting to a library and importing as needed. Also, digital and analog meter icons can now be scaled to any size for special effects and easy viewing from a distance. Analog meter icons show tic marks, as well as max/min values.

Remote access allows you to access real-time data over a local area network The Remote Access capability uses the TCP/IP protocol to transmit real-time data between remote workstations and the central computer. Each station must have a valid TCP/IP address defined for it. This is done from the Network Control panel in windows. A Remote Host workstation can send data to any number of client workstation. A Remote Client can connect to only one host (central computer) in the current version of the software. A Host can also be a client, therefore data can be daisy-chained from one computer to another.

Remote scanning diagram shows that Millennia system running on a remote computer can communicate to the hardware through LAN-Internet-LAN connection setup. As shown on the diagram, remote scanning was tested on a computer system that was at least 40 miles away from our company, where all the hardware was located i.e. I/O cards, sensors, outstations, etc. According to our test, communication was nearly perfect (99% to be exact).

All the other components shown in the diagrams are devices that make up LAN connections and the Internet - router, DSL modem, etc.

More about Monitoring and Control System for Windows Based Software

DX-COM-LAN - is a specially developed card for LAN communication that receives network data packets, converts them to RS485 bytes for local communication and vice versa.

More about Monitoring and Control System for Windows Based Software

By selecting one of the type (FT Protocol) option from pull-down-menu, Millennai/DX FT system can communicate with the hardware with faster DX-BUS polling cycle speed.

That's the processing speed of Rel-Tek's new 'Millennia-FT' software and telemetry. Speed was measured on an actual 18-sensor system, clocking 392 scan cycles per minute - an cycle repeat delay of 0.15 sec. Equally significant is that after 3 days running and 30 million data updates there were zero errors. Not one. That's a communication reliability of 99.9999967%, and counting.

This recent test confirms the results of a very large system test conducted last year. That system was fully loaded and had an update delay of 3.5 sec. 'FT' stands for 'Flash Telemetry', a theoretical idea. On implementation, though, it far exceeded our expectations.

Communications is the backbone of any monitoring system. Without good speed and reliability, a telemetry system isn't worth anything. Rel-Tek released its 'Flash Telemetry' monitoring and control package last year. To date, there are four systems operating in underground US coal mines. Another system is scheduled for shipment July 1, 2010.

The extreme speed and reliability of this 'FT' technology reflects Rel-Tek's software prowess and the clever integration of telemetry with field outstations. Akin to ZIP files, the data stream is compacted for max density. The actual data rate is 19.2KB, transmitted over inexpensive twisted-pair cable.

High-speed repeaters are placed at one-mile intervals, extending a system to 20 miles straight ahead, while handling lateral branching as required. LAN, fiber and wireless WiFi data-highway interfaces are also available.

Our gamut of MSHA-approved and classified intrinsically safe sensors use generic 4-20ma analog signals, converted at the outstation using 12-bit resolution for just 0.0244% digitizing error. Sensors include CO, O2, CH4, smoke, temp and pressure. Air velocity, humidity, vibration, H2S, SO2, and CO2 are also available for use with the system. Generic is good.

MagiKal is a powerful utility for automatically calibrating hard-to-reach sensors - i.e. high overhead, in pits, over conveyors, inside silos, under unsupported roof, behind seals and such. It runs under the Millennia-FT package. Calibrations are implemented on a monthly schedule.

Other news -- Applications of Millennia-FT and gas sensors in 'Refuge Alternatives' will include MagiKal to maintain sensor accuracy over years on standby, unattended. MSHA approval for Rel-Tek's 'awAIR' shelter monitoring systems is pending. Included, is networking with the surface.

Large and small mines can benefit from these new technologies.

No reviews were found for Millennia-DX - Monitoring and Control System for Windows Based Software. Be the first to review!