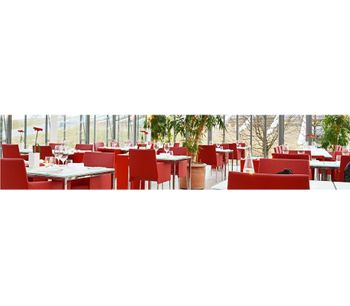 In enclosed and air conditioned rooms, such as in a hotel or an inn, the people therein are dependent on the quality of existing air conditioning and ventilation system. Since the air is often consumed only a small part is replaced by fresh air, the type of air conditioning and proper maintenance of equipment playing  a major role. But also the quality of directly intaked outdoor air determines the air quality in buildings. Supposedly good outdoor air quality does not automatically mean good indoor air quality. Besides dust, particulate matter, pollen a.s.o. the air contains significant amounts of bacteria, fungal spores and microorganisms that are injurious to health. Odors from certain areas of operation, e.g. Food, fitness, and similar areas are trafficked into other sensitive areas. There are also numerous chemical compounds from outside, evaporation from the climate system itself, the building and the fixtures therein, respectively materials.

Aero planktonic microorganisms and can not be easily filtered out of the air and through the ventilation ducts. Usually they were carried and spreaded within a very short time  in all parts of the building.

Once the HVAC systems turned off or proliferate at a reduced power (eg at night) , the bacterias accumulates in the existing filters and multiply themselves explosively, promoted among others by the humid climate of the surrounding air. If the performance of the HVAC is increased again, these bacteria are in an elevated concentration blown back into the rooms where they are then set out therein persons absorbed through the respiratory tract.

The increasing downtime in the personnel department of companys are a result of this high growth rate of airborne germs, as evidenced by recent studies. It is concluded among other long-term studies of the health authorities, that in almost all buildings inadequate air quality can be seen. This leads to high rates of infection known as the 'Sick Building Syndrome'.

The Sick Building Syndrome is now the largest climate problem in all buildings. It is caused largely by the destruction of the natural oxygen ions through the general air pollution, which prevents natural air disinfection in all buildings. For this reason,  in air conditioned or centrally-ventilated and ventilated buildings where people can come together every day, it is much easier to infect each other.

The enormous costs of sick building syndrome have become the subject of international conventions, because the cost explosion in the health system is in the billions, and charges directly and indirectly the labor costs.

There is probably not a hotel or restaurant where there are no air problems. Even with a well designed, conventional air conditioning system, it's hard to keep cooking odors from the restaurant areas. Even  in the kitchen itself it is  not easy to master odors.

Secondary containment for kitchen wastes are also at greatest cleanliness a base of bad odors.

Bacteria, particularly stachrophyle germs (bacteria living in cold areas) threaten any stockpiling of food, even in cold rooms. This is not just a question of hygiene.

Smoking areas are an abomination for non-smokers. Cold smoke, despite of air ventilation, has been established in  upholstery, carpets and decorations. This is true also for small bars and restaurant spaces.

VARIONIX air cleaning and disinfection units treaten all occurring odor problems with ease. They sterilize the air and increase, by appropriate treatment of the respiratory air, very much the well-being and mental and physical activity by guests and staff.

Set by the attraction of their negative charge, the oxygen ions bind to all free-floating germs, bacteria and fungal spores in the air and oxidize and destroy them,

Increase of blood oxygen absorption, resulting in increased mental and physical activity. Extensive studies showed that the blood oxygen absorption in sufficient bioactive (negative oxygen ions)  air, is 5 - 8% higher than normal. The results show that visitors, conference participants and staff, are less fatigue, and noted an increase of concentration and receptiveness. The work rate increases, loss due to sickness will be greatly reduced.

A kill rate of 80 - 95% is confirmed by test institutions (expert opinion). Thus, in the transitional period the most feared infection risk will be considerably reduced , and reduces the loss due to illness. But also the risk of infection among the guests is minimized.

Odor is largely based on exposure to bacteria.  Killing the bacteria is one of the bases to eliminatie odors. Smell of aerosols, which are absorbed by the nasal olfactory molecular substances are also oxidized and reduced after a short time and not simply 'covered'.

Hotel and Restaurant businesses producing numerous loads of indoor and outdoor air, which not only damage the company image, but also can cause problems with the locals .