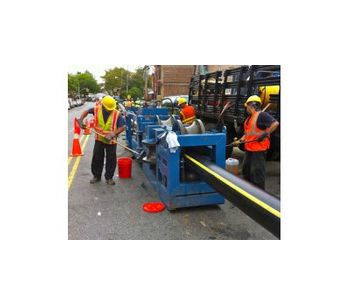 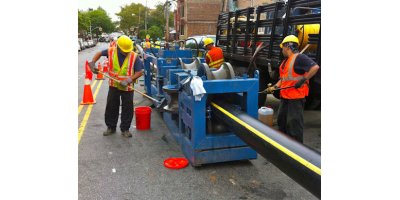 PIM Corporation's Rolldown system uses standard polyethylene (PE) pipe to create a close-fitting liner within an existing pipeline. Rollers reduce the diameter of the PE pipe and allow it to be pulled through the host pipe. The liner is then pressurized to revert it to its original size. Rolldown can be designed as a stand-alone, fully rated pressure pipe, or as a thin-wall liner used to eliminate leaks in an otherwise sound pipeline.

Cold Process: No heating equipment required. The entire process is carried out at ambient temperatures.

Start-Stop Capability: The process may be stopped at any point in the installation process and then safely started again.

The patented Rolldown process can reduce the outside diameter of polyethylene pipe significantly without affecting the long-term characteristics of the pipe in any way. Unlike other diameter-reducing processes, Rolldown does not stretch the polyethylene nor weaken the pipeline material.

A polyethylene pipe which has been reduced by the Rolldown process will hold its new diameter for several days unless deliberate steps are taken to revert it to its original size.This allows much more control over the installation schedule than is possible with other processes.

As a result of the reduced diameter of the new pipe, conventional sliplining techniques are used to insert it into the original pipeline. Since winching loads are very low, neither pipe is subjected to harmful stress, even when large diameters or long lengths are installed.

After insertion into the old pipe, hydrostatic pressure is used to trigger the molecular memory of the polyethylene. This causes the new pipe to attempt to return to its original diameter. As a result, it presses tightly against the inside of the old pipe, virtually eliminating all annular space.

No reviews were found for Rolldown - Tight-Fit Polyethylene Lining. Be the first to review!