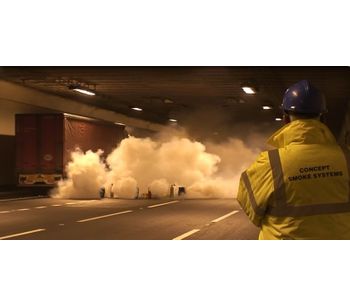 Making smoke in a very open environment or external environment can be a challenging! An oil-based smoke generator, such as a ViCount system, can produce dramatically more artificial smoke than multiple water based systems. This is due to the fact that the smoke ViCounts produce, being oil-based, does not evaporate in the same way and speed that water-based smoke does.  The smoke from a ViCount smoke generator will travel for 1000`s of meters, compared to a typical water based smoke machine that may produce a smoke visible for 100 meters.  Just one ViCount or Vulcan can replace 10 or more conventional water based smoke systems.

ViCount`s have been used world wide for many tunne...

ViCount's have been used world wide for many tunnel smoke simulations, be it for RTA training / evacuation exercises or tunnel ventilation testing.

The smoke from the ViCount & Vulcan does not evaporate like that produced by water based smoke systems, enabling dense smoke concentrations to be achieved and maintained in exceptionally large volumes, this feature also makes the units extremely capable when demonstrating the effectiveness of impulse ventilation systems, Saccardo Nozzles and PPV systems. The smoke is capable of travelling kilometres in an enclosed tunnel environment.

The ViCount & Vulcan also create a temperature resistant smoke, it can be added to the hot gases created by a suitable heat source to give a thermally buoyant smoke if required.

The class leading particle size of Concept’s smoke (0.2 micron mmd) means that minimal smoke chemical is used to produce huge volumes. This means that the ViCount & Vulcan are not only one of the world’s most efficient smoke generators but are also among the safest.

ViCount & Vulcan smoke is controllable from a small wisp to a large plume. They are capable of producing smoke at maximum volume if required for 85 minutes.

For external training exercises, such as public order training, where it is necessary to have a portable source of smoke, we would recommend a Concept Artem Smoke Gun. The Artem Gun is a hand-held smoke generator, capable of producing huge volumes of dense, non-toxic smoke on-demand, independent of any power supply.